Share All sharing options for: We're going to Canada! Wait...what?

The basketball team is traveling to Toronto in August, apparently:


I wanted to take this opportunity to bring you some of York's tempo-free stats, but their athletics site is rather lacking.

The University is represented in Canadian Interuniversity Sport by the York Lions. Beginning in 1968 York's sporting teams were known as the "Yeomen", after the Yeomen Warders, the guardians of the fortress and palace at the Tower of London, otherwise known as Beefeaters. Later, the name "Yeowomen" was introduced to encourage women to participate in sports, as "Yeomen" was deemed to be gender-specific. Popular sentiment ran against this name scheme, however, as many students were fond of noting that a "Yeowoman" was fictitious, neither a real word nor having any historical merit. In 2003, after conducting an extensive internal study, the University replaced both names with the "Lions", as part of a larger re-branding effort, and a new logo, now a white and red lion, was brought into line with the university's new visual scheme. 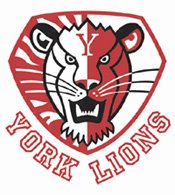