-- Clayton Shunick, well on his way towards having the opportunity to let Dusty Baker destroy his arm:

BILLINGS MUSTANGS PITCHER CLAYTON SHUNICK HAS BEEN NAMED THE PIONEER LEAGUE PITCHER OF THE WEEK.


THE 6-FOOT-1 RIGHT HANDER WENT 1-AND-0 IN TWO STARTS, STRIKING OUT 12 BATTERS WITH NO WALKS AND ALLOWING ONLY TWO RUNS IN 11 INNINGS OF WORK. SHUNICK IS A 5TH ROUND DRAFT CHOICE OF THE CINCINNATI REDS AND PLAYED HIS COLLEGE BALL AT NORTH CAROLINA STATE. SHUNICK AND HIS TEAMMATES HAD THE NIGHT OFF, BUT WILL BE IN OGDEN THIS EVENING FOR THE BEGINNING OF A 7 GAME ROAD SWING.


GOOD WORK, CLAYTON. (WHY ARE WE YELLING?)

-- In other baseball news, it sounds like there is at least an outside chance that Marcus Jones returns to NC State for his senior season:

Although he did not specify the amounts discussed, Jones, selected by the Nationals in the 11th round, did say this: ‘‘As much as they say they want me in their organization, we’re still talking about a few numbers on a piece of paper. It is frustrating but it’s one of those things that has to work itself out. We’re still talking."

Jones, a native of Washington, D.C., is not standing idle during the negotiating process as he recently committed to play for the Hyannis Mets of the Cape Cod Baseball League. He joined the squad last week.

‘‘I’m just trying to stay fresh and play somewhere," Jones said. ‘‘The deadline [to sign] is Aug. 15 so I’ll have to make a move by then. We’ll see what happens. If I don’t end up signing I can go up to school and get my diploma [and finish his final year of college eligibility]."

We'll see what the run D's got right away. Jamelle Eugene, Andre Brown and Toney Baker will all get carries for the 'Pack. Corralling them will be a challenge, but the Gamecocks have the horses up front to make it happen.

Watch for Jasper Brinkley and Eric Norwood to be immediately visible at linebacker. And maybe end Jarriel King will get some face time, if he can get his academic situation in order.

N.C. State has no clue who its quarterback will be this fall. (Sound familiar, Gamecocks faithful?) But with those runners, it won't really matter. A trained monkey could probably hand the ball off.


I'm willing to give anything a shot at this point, even a trained monkey--preferably one that was shot into space and came back super-intelligent. Or failing that, perhaps Harrison Beck's seeing-eye dog, Pumpkin. "What's that, girl? Andre's trapped in the backfield?" 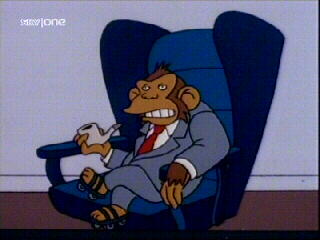 Just need to create bigger passing lanes, is all.