NC State opens its 2009 season with an exhibition game against Div-II Fort Valley State on Thursday, and this looks like the perfect opportunity to get out and run. Not only did the Wildcats turn the ball over a metric shit ton, they also averaged 83 possessions per 40 minutes (no doubt a bit TO-inflated) in 2008. They neither shoot nor rebound well offensively, so there are going to be plenty of transition opportunities for the Wolfpack.


Starters (As the link to the roster on their website is broken, I've had to fill in some blanks here.):

Martrez Scott (6-3) -- FVSU's only returning starter, Scott led the team in points, assists, and steals. Both his steal percentage and his free throw rate were outstanding in 2008, but he was not an efficient scorer.

Jesus Shuttlesworth -- A gifted shooter who can score from anywhere on the court.

That Tall Guy From The Air Up There -- Needs to add weight, but already possesses a good all-around game. The lack of bulk makes him a rebounding liability, but his exceptional quickness allows him to be a disruptive defender.

Neon Budreau -- Transferred back east after a scandal at Western University left him jaded with big time college basketball. Still raw in the post, but his size and muscle allow him to score efficiently regardless. Plays with monster truck force.

Whistles get a good workout in the SIAC. Over half the FVSU roster averaged more than five fouls per 40 minutes last season, and while I hesitate to liken them to Mick Cronin's bone-clubbing brute squad, the Wildcats certainly will bring the hack. 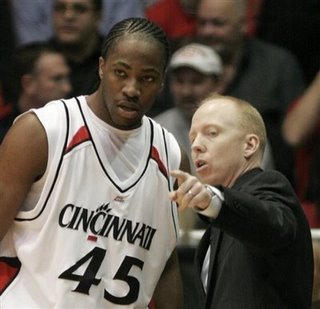