Russell Wilson was named first team All-ACC earlier today, and Dr. Saturday has a timely look at the Wolfpack's offensive improvement under his leadership:

It should be noted that the lone win in the first four games was the only game Wilson played from start to finish, the 30-24 upset of then-undefeated East Carolina; the two games he missed entirely or almost entirely (other than William & Mary) were 34-0 and 41-10 humiliations at the hands of South Carolina and South Florida. Overall, NCSU finished 5-3 when Wilson went the entire way, including four straight wins (the last three over winning teams -- Wake Forest, North Carolina and Miami) from a 2-6 grave to close the year at .500 and within sniffing distance of a bowl game.

The main reason is in the final column: Wilson finishes the season not only as the ACC's top-rated passer, but with a single interception to his name against 16 touchdowns; the interception came on essentially a Hail Mary near the end of the Pack's loss at Clemson in September, Wilson's final throw of that game, meaning he went 226 attempts over his last eight starts without giving the ball away, and the team was +12 over the last two months.


It's interesting to look at where the numbers we've averaged over the last seven games (359.4 yards per game, 5.7 yards per play, 28.4 pts/game) would put us had they been our full-season averages: 62nd in total offense, 36th in yards per play, 44th in scoring offense. That's improvement beyond any reasonable expectation, and we've seen the culmination of that progress over the last two weeks, as the Pack has scored 79 points and rolled up more than 900 total yards against a couple of solid defenses.

Amazing how quickly despair can become HE GOT LASERS COMIN UP OUT HIS EYEZ. BOOM, BITCH! 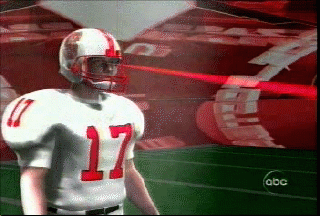 If anyone's worthy of wacky-computer-graphic-superheroization, it's Russell Wilson, who quite possibly is a superhero. I don't know how else you explain a quarterback that throws one INT in 252 attempts as a freshman and then goes on to commit zero errors while OPSing 1.000 (.335/.443/.557, to be exact. I've seen the future.) for the baseball team in the spring. No telling what his summer plans are, but I get the feeling they'll involve rescuing old ladies from burning buildings.