Led by their strong shooting, the 2008 Jackets finished the year ranked 33rd in adjusted offensive efficiency. They were the third-best shooting team in ACC play, behind Maryland and Duke. Whether by way of graduation or regression, however, they've lost their ability to score efficiently and are in the process of coming to terms with a grim new reality full of clanks and thuds.

Here at least, Tech's been able to stave off the precipitous decline they've seen elsewhere thanks largely to Gani Lawal and Alade Aminu. Both have stepped up their involvement considerably while also carrying over their efficient scoring.

Oh, Great Timing: Zach Peacock didn't play a lot last season but was a significant part of the offense when he was on the court, taking 24.3% of the shots while maintaining a 55.4 2FG%. He's still that involved this season, and getting more minutes to boot, but his effectiveness is way down: he's made just 48.9% of his twos.

Style Crisis: Maurice Miller shot well from outside as a freshman in 2008, but he started 2009 in a terrible slump and then got hurt, basically leaving the Jackets without their three most reliable outside shooters from a year ago. Miller is back now and, encouragingly, hit all three of his three-point attempts against Duke.

Hewitt's club needs the additional threat, because at this point, it's about the most one-dimensional team in the country; not only do the Jackets shoot poorly from three, they hardly ever bother to attempt them--21.5% of their field goal attempts come from beyond the arc, a proportion that ranks 339th. That sure simplifies the opponent's defensive game plan.

Which brings me to Lewis Clinch:


As someone who has been a good three-point shooter in the past but is admittedly hurting the team of late, can you afford to ask him to scale it back a bit? Someone has to try to keep the defense honest. 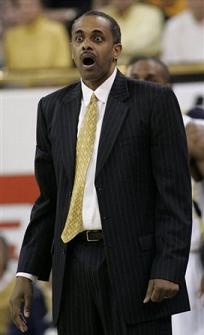 "You have got to be kidding me. That's three airballed free throws this half." 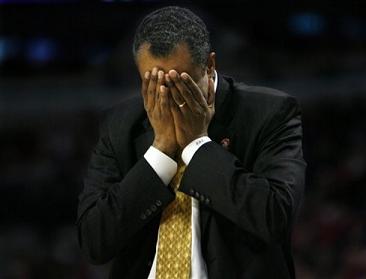 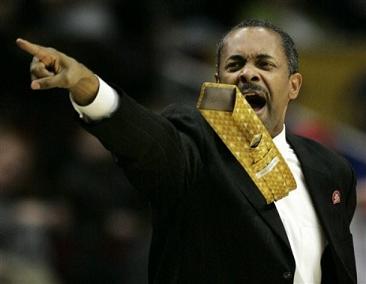 "No, you know what, no, Gani, go to the goddamn locker room. You see this?
You see what you've done? That was so fucking awful, I'm eating my own
goddamn tie just to get the bad taste out of my mouth."

Like Florida State, they're big. Time to find out if we learned anything.

I'm curious to see what happens when two teams that "don't know how to win" play each other. I hope the universe doesn't implode.