While NC State's inclination towards compelling television is kind to the networks, I could really do without all this unnecessary close game crap. The pattern has become so commonplace that it creates a very confusing mix of satisfaction and dread. Only in the hands of the Wolfpack could a double digit lead be both reassuring and uncomfortable. I'm still looking for the proper way to deal with our inevitable short-term meltdowns. Sometimes I'm searching for an expletive that's not yet been invented, as it is in these moments that the English language feels a bit restrictive. Other times I'm wondering if there's anything good on Lifetime.

It's just the ebb and flow of a basketball game, I guess, and not something that should be particularly shocking for a team that shoots well but has trouble protecting the basketball. When we sting a bunch of possessions together without turning the ball over, we can really get rolling. But when we get careless, look out. That's how it'll continue to go for this team, but as long as we continue to win, I'm not going to do too much griping after the fact (this post excepted...). What was I going to do with the months at the end of my life that I've lost, anyway? Eat more pudding?

-- If Tracy Smith met the minutes requirement, his 19.1 offensive rebounding percentage would rank him 3rd nationally. And that OR% doesn't include the three offensive boards he grabbed against UNC or the five he picked up today. He is a force in more ways than one.

-- When Virginia got the ball back down three with under 20 seconds left, Sidney Lowe took advantage of the foul situation and decided to go ahead and put Virginia on the line rather than let them fire up a three. The Cavs are terrible from outside and great from the line, but I liked the decision. Landesberg hit both FTs the first time but missed the first of another one-and-one seconds later, and that was the ballgame. Even if he'd made those to pull UVA back to within one, there was so little time left that when the Cavs eventually got the ball back, they were looking at a lengthy, rushed three-pointer. Those odds are much better for us. 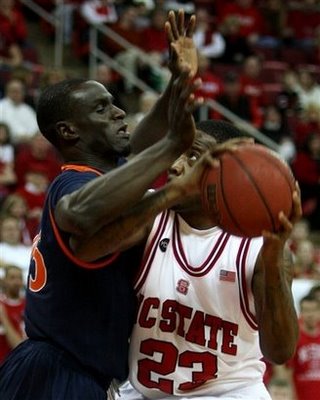