It wasn't what you'd call an auspicious start, what with the Wolfpack playing without effort or control in the first five minutes, committing a handful of turnovers as the Jackets built an 11-5 lead. But State eventually cut out the dumb mistakes, just about every shot they took went in (seven or eight in a row at one point), and the rest of the half was a breeze.

The second half went much the same way--Tech came out with renewed effort and pressed after every basket in the early stages, State committed another handful of mistakes (11 of the Pack's 21 turnovers came in the first five minutes of each half), and the Jackets managed to cut the lead to three. It was taking the Pack almost 10 seconds to get across halfcourt on every possession during this stretch, limiting their ability to run the offense, with predictably disastrous results. But once we stopped depriving ourselves of shots, and once Tech went cold, depriving them of opportunities to press, it was all over.

Georgia Tech's defense did a fine job in the turnover and defensive rebounding departments--71.6% shooting, though, that's a massive trump card. The Pack's defense was pretty good too--we limited their second chances and kept them off the free throw line, allowing them to brick themselves out of the game.

-- That was the most efficient performance by an ACC team against the Yellow Jackets this season. We hit two-thirds of our twos and more than half of our threes.

-- Several members of the supporting cast came up huge today: Javi scored 14 points in 21 minutes, was perfect from the line, and sunk a sweet left-handed circus shot; Dennis Horner, fully enulfed in flames, scored 11 in 16 minutes; and CJ Williams, who sparked the team by hitting some early threes, scored 11 points and had a team-high 5 assists in 23 minutes. The boost provided by those guys was especially important since Tech made Ben McCauley a complete non-factor.

-- And, of course, there was Tracy Smith, who started out as slowly as the team, but drew some fouls and began to heat up until... BOOM. More noteworthy than his scoring, and hopefully a sign of more to come, was the fact that 9 of his 10 boards came at the defensive end. Tracy's been a fantastic offensive rebounder, but it's at the other end where we really need those efforts, and we got that today. When both Smith and McCauley are rebounding well at the defensive end--as they did today--the defense transforms from one that has to hope it can end possessions to one that can expect to end them consistently. Since it's the defensive rebounding way or no way for the Wolfpack defense, that's a big deal. 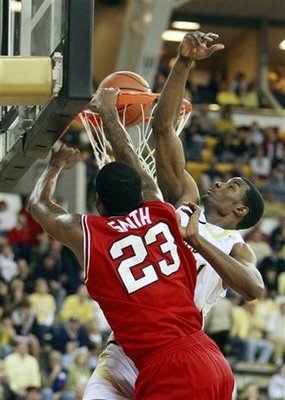 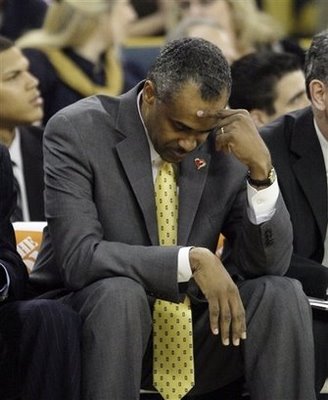