On a night where State's upperclassmen were not at their best, the team had to look to the younger guys for contributions and managed to avert disaster for a while thanks to Javier Gonzalez's stunning first half performance. But the Pack came out cold in the second half and turned the ball over a few times early while Carolina continued to score at Will; a 14-0 Heels run pushed the lead to 15 points with about sixteen and a half to go, and that was that. Carolina presents an impossible matchup for NC State, and we weren't about to string together enough stops to get back to within striking distance.

Encouragingly, the Wolfpack turned in another fine offensive performance against a tough defense and some unsympathetic officials. They've averaged over 1.1 pts/poss in three straight and have not been held under a point per trip since the Duke game on January 20th. (Which has the offense up to 34th in adjusted offensive efficiency.) If they could just find a way to play better defense, they'd really be on to something. 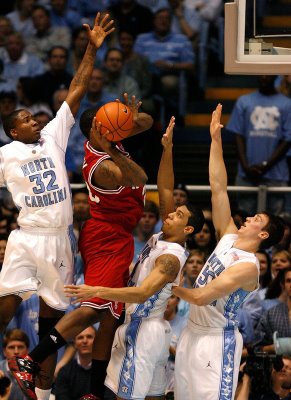