State made Jeff Teague a non-factor at the offensive end again, and both LD Williams and Al-Farouq Aminu were invisible as well, but James Johnson was unstoppable, Chas McFarland rebounded from some poor play of late to turn in a nice performance, and Ish Smith ... good lord.

It's always frustrating when the opportunity to win is there and the Pack can't take advantage of it, and the possessions that the Wolfpack botched in key moments during the latter stages of both halves certainly hurt. But the fact that they had those opportunities at all after falling behind 15 points on the road against a good team playing well is another small sign of progress. I really didn't expect us to get back into it.

The next step: develop secret defensive potion/look into voodoo/hire witch doctor. The surest sign that Wake Forest is out of its comfort zone is when it's firing up a bunch of threes. Only about 20% of their FGAs have been threes this season, and that's how their shot selection broke down last night. State never could make Wake think twice about going into the paint, and the Deacs played to their strength all night. 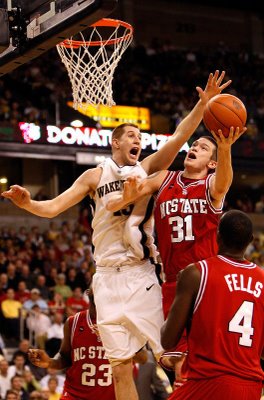