Sidney Lowe seemed just as frustrated and perplexed by what he saw last night as anyone else:

"For some reason our perimeter people were very tentative making passes and a little slow on some cuts. We allowed [the zone] to be effective."

"We had some really bad turnovers that I can't even explain. Just bad decisions – jumping into the air to make a pass, stuff like that."

"I'm frustrated because I'm more surprised that we did that. Like I said I've been disappointed in games or upset that we lost games but not upset at our players how they've played. But today I'm just frustrated because I don't know where this came from."


"We allowed [the zone] to be effective" says everything about the Pack's effort. I didn't get the feeling watching the game that the guys were confused so much as they didn't care to try. They settled for too many jumpers, never looked comfortable, and worse, never asserted themselves. At the defensive end, I'm not sure they contested a jump shot all night. Maryland dictated everything.

Almost 40% of State's attempts were threes, and against a team with a small front line, that's unacceptable. Their lack of interest probably deprived them of as many points in the paint as the zone defense did. Lowe said this when asked about getting the ball inside:

"To me it didn’t look difficult. We had our tall guys on the perimeter. We didn’t make the pass inside. We were too tentative for some reason. We broke down."


A losing record in conference play is assured, the last remnants of our NCAA tournament hopes are dashed, and there are two games left. What now, I wonder. 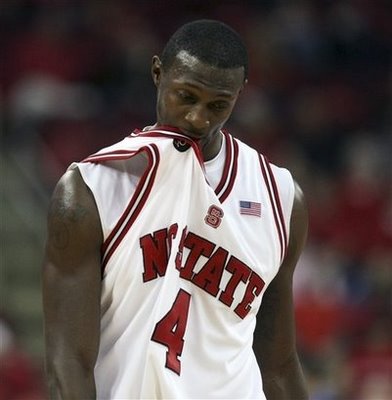