This one went about how you'd expect a game between the ACC's two worst defenses to go; both teams played solid defense for stretches but generally didn't do a whole lot to discourage scoring. Boston College came out smoking, executed the offense perfectly, and took advantage of a bunch of open looks to hit their first eight attempts from the field. The Wolfpack managed to survive the early barrage and fought back to tie the game at 20 with about 12 minutes left in the first half. From there, they took control and built a nine-point halftime lead.

The second was mostly back and forth, though State was able to create a bit of separation thanks to a couple of key late plays by Javi Gonzalez--he nailed a tough layup and grabbed a miraculous offensive rebound a couple of possessions later that resulted in a Dennis Horner three and an eight-point lead with 2+ minutes to go.

Of course, the game couldn't possibly end in comfortable fashion; that simply wouldn't be proper. Rakim Sanders starred as this game's Random Player Who Gets Stupid-Hot All The Sudden, nailing three triples in the last few minutes. The Pack added more shaky late-game free throw shooting to increase their degree of difficulty.

But they did enough to hang on. Ben McCauley, who was more involved at the offensive end than he had been in some time, was outstanding in his final home game. McCauley finished with 20 points on 7-for-12 shooting, and fittingly, iced the game with a couple of free throws.

Javi did a little bit of everything: 5 points, 5 boards, 6 assists (against 1 turnover), and he helped limit Tyrese Rice's impact.

After allowing Boston College to grab 60% of its misses in the first meeting, the Pack limited them to less than 30% of the offensive boards last night, which was a huge factor in the win. They also kept the self-inflicted mistakes to a minimum--against a team that doesn't force turnovers, that's really all you need to do to ensure a low TO%. It was just the second time in conference play that State finished even or better in both the turnover and rebounding categories. 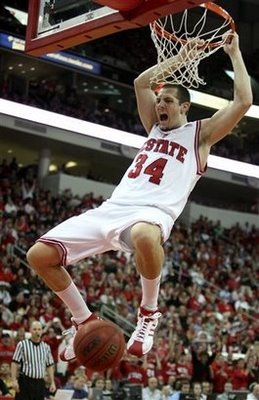