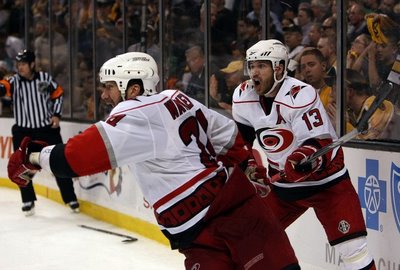 A gallon of victory beer and a late night trip to the airport makes for a long next day, but it was worth it. I got to RDU right as the players were beginning to file out, which led to the comedy that was me driving my hoopty by all the Canes fans, who waved at me as though I were one of the players.

I was looking around earlier, trying to figure out if there's ever been an instance where a team has won two game 7s on the road in one playoff run, and while I couldn't find an answer to that question, I did find this note about the improbability of the win in New Jersey:


The Hurricanes didn't have to beat those kinds of odds last night, but it sure felt like they did.