You Can Stand Under Mike Archer's Umbrella Ella Ella

Share All sharing options for: You Can Stand Under Mike Archer's Umbrella Ella Ella

This game is easy.

Footage filmed well before Saturday's signature victory undoubtedly played a part in the success enjoyed by Blue Devils. After the game, Lewis gushed about how the game went according to plan -- to say the least.

"I felt confident coming into this game with the game plan that Coach gave us, and they showed us exactly what we saw on film," Lewis said. "They didn't do anything differently, so I felt confident in what we had planned because I knew the plays that we had called were going to beat the coverage that they were playing."

An experienced quarterback, a predictable scheme, and poor execution.  It's no wonder.

I'm going to take a look at a couple of instances where Duke's quick passing game killed the Pack's defense, and then I'm going to block this week from memory. 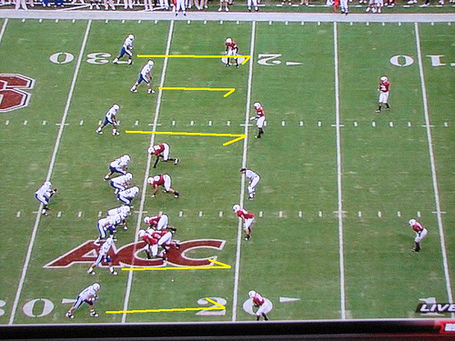 Duke is in an empty, five-wide set; the Pack, as usual, is playing zone--it's a cover two look that has the first level playing quarters.  State brings a linebacker from the near side.  All five Duke receivers run the same five-yard route. 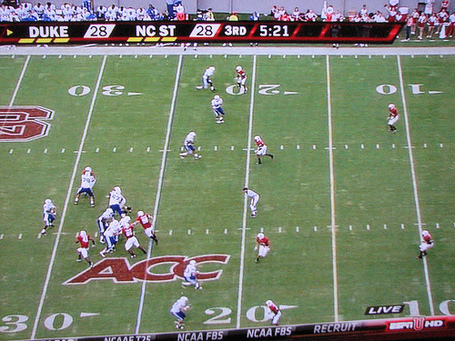 Maddox is free off the edge but has no chance to affect the play, as Lewis has already started to throw the football.  NC State's safeties recognize what's happening too slowly, but they've left too much cushion for recognition to make a big difference anyway.  (Those were consistent themes throughout.) 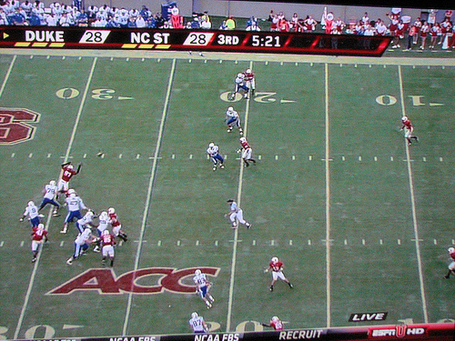 The ball eludes NC State's only legitimate pass defense--Willie Young's arms--and the defensive back on the hash (Rashard Smith), sees what's going on before the ball is in the air but doesn't have a good angle and can't make a play on the ball.

Even so, the play should have been done right there after the five-yard completion.  But horrendous tackling turns this five-yarder into a big 21-yard gain:

Too bad this isn't flag football. 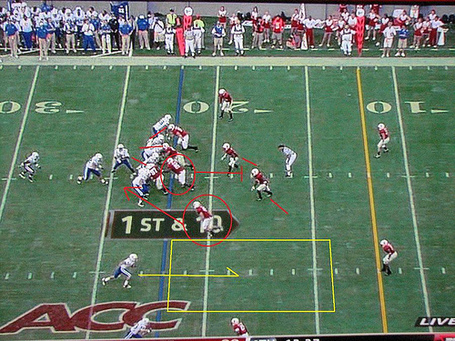 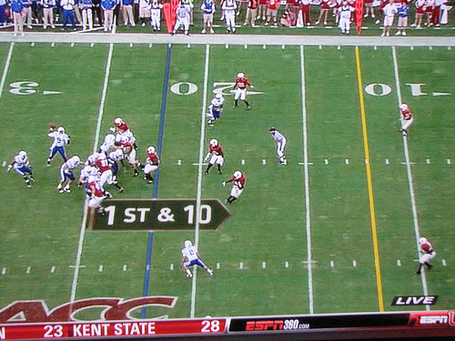 Lewis looks immediately to the area vacated by Cole.  The Duke receiver sits down like he's supposed to, State's first level defenders don't have enough time to reach the vacated area, and the safety nearest the play is still backpedaling as Lewis puts the ball in the air.  Too much staring by the linebackers here and not enough haste, but they weren't going to get there regardless. 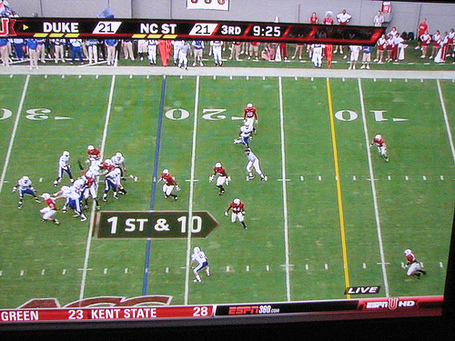 The outside receiver has taken the cornerback on this side of the field off screen and out of the play.  Once again, it's easy pitch-and-catch.