Sidney Lowe Stays On Message, Plus Other Hoops Items

Share All sharing options for: Sidney Lowe Stays On Message, Plus Other Hoops Items

I have a lot of questions for Sidney Lowe about NC State's defense.  Do you think that better defense is necessary for what you want to do with the pace?  If you can't find a way to get stops with more regularity, is it even feasible to expect an up-tempo team?  How do you get the guys to force more turnovers?  What changes, if any, do you make to your defensive approach with so many new players?  Does the team's lack of size/experience worry you in terms of defensive rebounding?  In terms of interior D?  Have the problems at the defensive end been more a function of effort or a lack of necessary skills?

NC State's defense has finished either last or next-to-last in the ACC in points allowed per possession in all three of Lowe's seasons.  In 2009, State had the ACC's worst eFG% defense, worst 2FG% defense, and they were next-to-last in turnovers forced per possession.  Defensive rebounding improved slightly but was still poor.  Lowe's defenses have done exactly one thing well, and that's keep opponents off the free throw line.  Unfortunately, that's the least important of the four factors.

But Lowe is talking offensive makeover again, and that has once more become the offseason's overriding theme.  Somewhere a GA just marked another deflection on his clipboard.

Most of the talk during Sunday's media day centered on the offensive side of things, with Lowe just paying vague, passing lip service to the defense.  Maybe the issue is that, at a glance, nothing appears broken--the 69.6 points per game NC State allowed last season put them sixth in the ACC in scoring defense.  But it doesn't take any knowledge of tempo-free statistics to realize how bad they were defensively in 2009; if you watched more than a handful of their games, especially in conference play, it was obvious.

-- NC State was picked 12th by the media, well behind 11th-place UVA.  There's some dudes at Basketball Prospectus that will tell you that's a very good call. 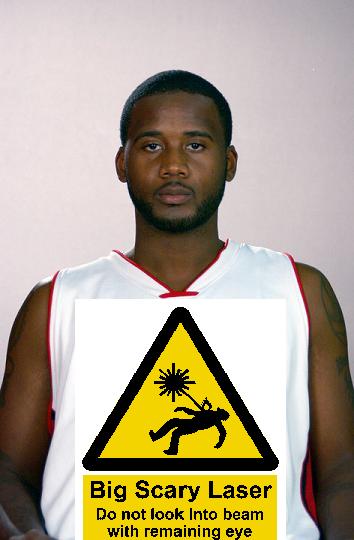 All in due time.

-- Lowe says NC State is headed in the right direction, and Farnold Degand feels 100% for the first time in a while.  No more gym classes, Farnold!

"I kind of like it though, because it means we are underestimated," Horner said Sunday afternoon at the Grandover Hotel and Resort. "We are flying under the radar. We like that role."

Lowe said his team had a preseason scrimmage with an outside team late last week that left good impressions.

That outside team was Richmond, and NC State lost.