-- Seventy-one possessions is a pretty fast game by recent Wolfpack standards, but it's not much proof of a real commitment to getting up and down.  For those of you who saw the game last night, did it look like the guys were making an effort to run more often, or was it mostly business as usual?

-- Vandenberg turned the ball over five times in 13 minutes, so those ball-swiping midgets must have been an issue for him.  Which is weird because if I were a seven-footer going up against such a small team, there's no way I would be able to resist holding the ball up as high as possible and going, "neener neener neener" all night.  Holding them at arm's length palm-to-forehead style, watching them flail uselessly.  Etc.

-- Tracy Smith scored the first bucket of the game, and I hope I see us start that way more often than not because that's an indicator that the guys are being patient and sticking to the inside-out plan.  WRAL's Ryan Craig:

For starters, it’s obvious Tracy Smith is the cornerstone of the Pack’s offense and rightfully so. Smith finished the night with a game-high 21 points on 9-11 shooting, and seemingly scored at will on a variety of moves in the paint.

The junior forward had a tremendous size advantage over the defenders he was posting up, but his effort wasn’t a case of beating up under-sized competition – his solid footwork and vast array of moves in the low block make him a scoring force that will be hard for nearly everyone in the ACC to contend with.

Sporting a drop step, baby hooks over both shoulders, an up-and-under move and an ability to take contact and finish plays, Smith proved Thursday night that he should touch the ball at least once on nearly every offensive possession State has this upcoming season.

I think he's ready.  Craig's post touches on a little bit of everything, and it's as good and thorough a recap you'll read about the exhibition.  Check it out.

-- The Indy Weekly's Bob Geary offers some thoughts as well.  Geary goes so far as to say that Tracy Smith/Dennis Horner/Scott Wood will be a better trio than Costner/Fells/McCauley.

-- Defense: the turnover and rebounding watch begins.  Those two factors--the 19.8 TO% and 32.8 OR%--are decent under normal circumstances.  If we averaged that for the season, I'd be pleased.  But I'm a little concerned that they were just decent against a really bad D-II team.  I'm not going to jump to any conclusions yet, but at the same time, it's hard to ignore even a minor hint that last year's problems remain. 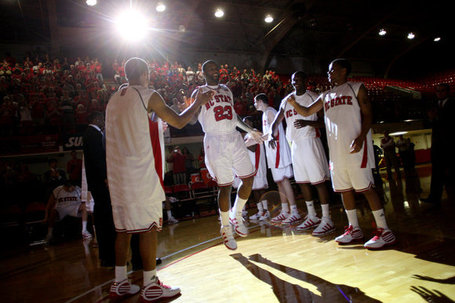 Welcome to the year of the Macrowave.  He promises there's good times ahead.