The most basic things were a challenge for NC State in the first half, from securing defensive boards without flirting with embarrassing turnovers to simply dribbling the basketball.  The Pack shot 42.6%, turned the ball over on a third of its possessions, and got to the line once, yet somehow managed to keep the game within reach.

That set up a wild back-and-forth second half, fueled by another post-break offensive surge.

I don't understand how basketball can look so difficult in one half, so simple in another.  How Javi can go from airballing a 10-foot floater to channeling Jason Williams.  I'm not going to lie, nor am I going to attempt to justify the illogic of the moment, but I thought we had them after Javi's four-point play with about eight to go.  It felt a lot like the Marquette game at that point, like the Wildcats were too stunned to hit back.

But they did.  We endured a drought at the worst possible time, failing as we had all night and all decade to take advantage of the opportunities presented us.  That last minute seems cruel in retrospect, an added level of unnecessary pain.

-- Jordan Vandenberg finished with 11 boards and one block in 25 minutes, though he affected many more shots than the box score suggests.  That's some fine work.  I think it goes to show that he's worth playing for his defensive impact alone.

-- Richard Howell scored nine points on 3-5 shooting, including one of the more improbable threes we're going to see this year.

-- Dennis Horner was 3-10 from the field and turned the ball over five times (well, four times, but this is Karl Hess's world, suckas).  No Macrowave and a bad Flame and still the win was within reach...Arizona is bad. 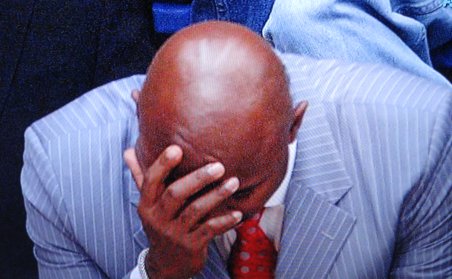