The Legend Of Aaron Rowand

Share All sharing options for: The Legend Of Aaron Rowand 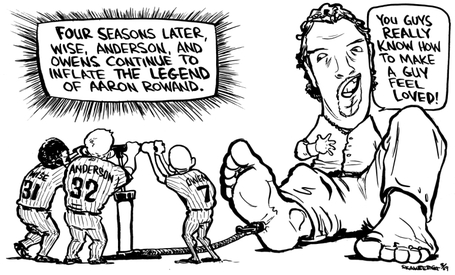 Rowand, man, that guy could play.  He could leap C.C. Sabathias in a single bound.  His defensive work in centerfield was the goldest of gold standards.  I remember that time in the Metrodome when he jumped three stories into the air to rob Torii Hunter of a home run and fired a laser back to home plate that tragically killed Nick Punto. (Forever safe in our hearts, Little Nick Punto.  We should all be so fortunate as to die by the hand of Awesomeness.  RIP.)

There are moments or people that you file under Never Forget, and you never do, but time passes and when you look back, there are alterations--imperceptible at first--but inescapable at last.  In truth, Rowand was a good player, sure.  His defense was legitimately outstanding.  He wasn't--and isn't--a great hitter.  Doesn't hit for a high average.  Doesn't walk much.  Doesn't hit for a lot of power.  When he was traded for Jim Thome, I don't remember being all that bummed about it.  Couldn't imagine it would be that hard to replace a guy coming off a .270/.329/.407 season.

Since his departure, there's been this guy.  This guy and this guy.  For various periods, these freakin' guys.  Some could field, some could hit.  None could do both and in general they've all sucked purple monkey dishwasher.  Hence the Legend.