He Loves It When You Call Him Big Papa

Share All sharing options for: He Loves It When You Call Him Big Papa

Ruffin McNeill, or "Papa Ruff," as the players call him, came to East Carolina after spending ten years as a defensive coach on Mike Leach's staff at Texas Tech, which is to say that Leach probably never knew McNeill was working for him. McNeill is a dreaded player's coach, and by most accounts an all-around nice guy:

Even before his players dubbed him "Papa Ruff," patriarch of the East Carolina football family, dispenser of fatherly love, discipline and quite possibly more hugs than any coach in the college game, Ruffin McNeill was not an easy act to follow.

"His biggest gift as a coach, and I recognized it early on, is a unique ability to motivate kids," Wiley said. "Everybody thinks he (just) loves 'em up, and he does love 'em up, but that allows him to be extremely demanding.

Could Coach Bring It In For The Real Thing usher in a new era of good feelings between NC State and East Carolina? No, probably not.

we are going to send the wolfpuppies back crying

McNeill played defensive back at ECU in the late 70s and has about 30 years of coaching experience--all of it on the defensive side--but it's his offense that grabs most of the attention. Which is just as well considering the disaster that is this team's defense.

Under some difficult circumstances--the Pirates returned four starters on offense, three of them offensive linemen--McNeill's implementation of the "Air Raid" has been reasonably successful.  They're better on a per-play basis than they were a year ago and they've upped their scoring average from 27 to 38.  I would caution against picturing Mike Leach's high-powered groups when you think about this Pirates team, though.  For now, and for a while yet, probably, ECU is a poor man's Texas Tech.

(Pass% = percentage of plays that were pass plays.)

Surprise, surprise--they're passing the ball a hell of a lot more often this season.  But they've yet to go full on Texas Tech extreme, as a 60-40 pass-run ratio is modest by Air Raid standards.  Leach's teams routinely threw the ball anywhere between 67% and 75% of the time.  Along with a bunch of other guys, quarterback Dominique Davis is still getting accustomed to the system, and it may be that McNeill's staff isn't ready to lean on the passing game as hard as they'd like to.

And while Davis has generally been better than Patrick Pinkney, his per-attempt output has been modest.  In that sense, the new offense hasn't quite delivered.  They're throwing for a bunch of yards, sure, but they're more methodical than anything else.  A middling unit by total offense.

As long time readers know, one of the things I'm always talking about is the direct, irrefutable correlation between loving 'em up and yards per pass attempt. 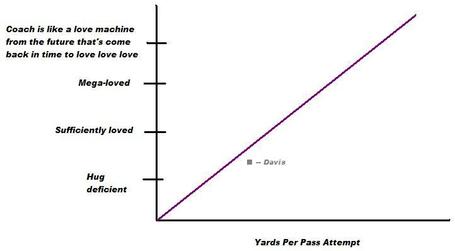 It could be argued that to this point in the season, Davis is criminally under-loved.

East Carolina has made strides in terms of passing efficiency and total offense, but they're not so much a scary touchdown bomb parade as they are a nuisance.  Let's keep it that way for one more week.