Nobody Expects The Spanish Inquisition

Share All sharing options for: Nobody Expects The Spanish Inquisition

If you'd told me after last season that when they met in 2010 NC State would be playing for an ACC title game appearance while Carolina would be fighting through a scandal involving Twitter, delicious cupcakes, and the nanny, I probably would have died laughing at the utter impossibility of those circumstances.  Yet here we are.

The Tar Heels have held themselves together pretty well under the circumstances; without so many valuable contributors, the defense has understandably taken a dive, but the offense has made up that loss and then some thanks to a rejuvenated passing game led by the surprisingly effective T.J. Yates.  In conference play, UNC's 5.9 yards per play average ranks third.  (NC State, at 5.4, ranks 7th.)  The passing game leads the ACC with 8.7 yards per attempt, while Yates ranks first in completion percentage and second in both yds/att and passer rating.  Quite the turnaround for Yates after finishing near the bottom of the league in those categories last season.  (A maturing offensive line helps.)

That turnaround must add an additional level of pain to the last six months for Tar Heel fans. (I know, I know. Everyone form an orderly line behind the world's tiniest violin.)  This offense could have led the breakthrough but because of the attrition on the other side of the ball, it's only good enough to secure another winning season and bowl appearance.  That's not bad, but it's far from what could and maybe would have been. 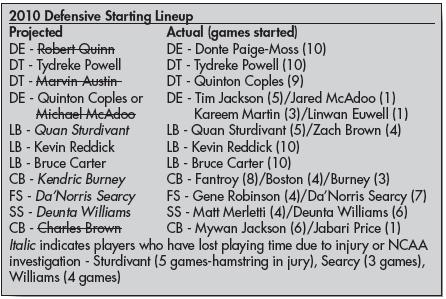 Virginia Tech's win in Chapel Hill last Saturday ended whatever division title hopes remained for Heels, and while that may make it a little easier to break their backs should the Pack build a lead, it probably doesn't change the likelihood that we'll get their best shot.  Damned rivalry games.

Lately Tom O'Brien's had all of the answers in this series.  It helps that Russell Wilson has put together two of the finest performances of his career against the Heels--all together, 37-55 for 538 yards, 6 TDs and 0 INTs.  But State's newly competent pass defense might have as big a say in the outcome as Wilson.  The keys are the same as they ever were: get off the field on third down, avoid the big pass play.  Turnovers would be nice, but Yates isn't as volatile as he has been in years past, the 4 INT performance against VT aside.

Now if you'll excuse me, I gotta get back to preparing for disappointment.