Share All sharing options for: Stupid NCAA Rules Changes, Plus Other Items

Currently, players who are penalized for taunting on their way to the end zone draw a 15-yard penalty on the extra point attempt, 2-point conversion attempt or the ensuing kickoff.

Beginning in 2011, live-ball penalties will be assessed from the spot of the foul and eliminate the score. Examples include players finishing touchdown runs by high-stepping into the end zone or pointing the ball toward an opponent.

Celebration penalties following a score will continue to be assessed on conversion attempts or the ensuing kickoff.

Yes, if you taunt your way into the end zone, the officials will take the score away and place the ball at the spot of the taunt.  The only excessive thing about any of this is the punishment, which hardly fits the crime--if it's a crime at all.  So what if I want to stretch my hammys with a few high steps near the goal line?  It's a good thing this rule wasn't in place while Amato was here.  His last two teams would have averaged like three points per game.

The NCAA also banned "the use of eye black containing symbols or messages," because kids who put bible verses, their home town area code, or--gasp--"Mom" on their eye black are threatening the very integrity of the game.

-- This advertisement for the spring game is very confusing: 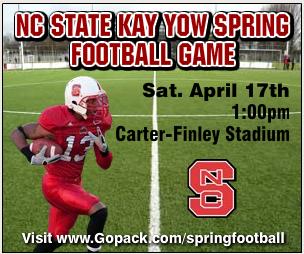 What type of football are we talking about?  Will George Tarantini be coaching the white team?

-- Rakim Sanders is leaving Boston College.  Sanders played poorly last season but was pretty good the year before that, so this is...bad-ish news for Boston College?

-- Jeff Bzdelik "rejected the identification of his offense is a "Princeton" system," as well he should.  Colorado played at a pace similar to Wake Forest's last season, and only about a third of the team's field goal attempts were threes.  For comparison, Colorado took threes about as frequently as Duke and Clemson last season.

-- CJ Leslie something something.

-- Duke has a bass fishing team.  Can't say I saw that coming.

-- Best of luck to golfer Matt Hill, who will be turning pro after this season.