Who's The Man Now?

Share All sharing options for: Who's The Man Now?

Here Joe Ovies speculates on potential new targets for fan angst now that Lee Fowler is toast.  I submit the following people and conspiracy theories for your consideration.

3-2: Whoever's responsible for not putting a statue of Jimmy V in front of the RBC Center and why isn't the court named after Jimmy V and Jimmy V, damn you all!

It's their fault we continue to struggle to re-claim our proper place atop the ACC.  Would that they realized that the only thing required to ease V's pain and thus end his beyond-the-grave smiting is a tribute of some sort.

As the head of ACC basketball officiating, Clougherty has the resources to affect the balance of power as he sees fit directly through his right hand man.  Does he have the inclination?  I'll leave that to your imagination.

20-1: The weather as a tool of unfathomable deceit.

In its most brazen display of power to date, the weather damaged the bell tower with a lightning strike last spring.  Now, I know what you're thinking.  This is nothing more than the purely coincidental intersection of randomness and probability.  Is it?  So you're an expert on the weather now, smart guy?  We hear all the time about the great things that NC State scientists are doing.  But what about the things they're doing we don't hear about?  What if our research departments have been infiltrated at the highest levels, and what if those infiltrators are working on secret black projects quite literally intended to rip the university apart from within?  I'm not saying, I'm just saying. 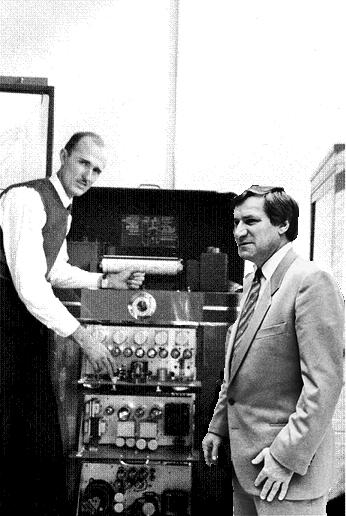 Evidence of a weather machine in the wrong hands? Or a hastily thrown-together photoshop?

75-1: As yet unrealized land-grab and conversion conspiracy.

Jason Capel at Appalachian State.  Jeff Lebo at ECU.  Buzz Peterson at UNCW.  Coincidences born of unimaginative mid-major administrations hiring as though they had something to lose?  Hardly.  Do you not see the pieces being moved into place here?  People, we are fucking surrounded: 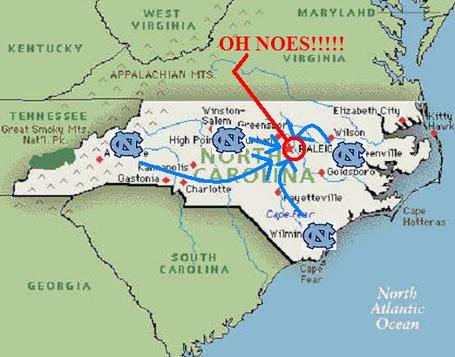 And wouldn't you know it: the mother ship is right there off the port bow, close enough to monitor and manage the situation as it unfolds.  How convenient.  Prong 1: hippies and comparative literature majors from the west.  Prong 2: Natty Light-toting swashbucklers from the east.  I haven't even highlighted the local news media, which is firmly entrenched and but a sharp writing utensil's hurl from campus.  When NC State is re-named the University of North Carolina at Raleigh in 2021, don't say I didn't warn you.