Share All sharing options for: Brief Final Thoughts On The Yow Hire

Not having followed Maryland's athletics department on a daily basis over the last fifteen years, I readily admit that I am having a hard time forming a concrete opinion about this hire one way or the other. I've tried to take everything in with an open mind since Yow became official on Friday.

The knee-jerk reactions struck me as hasty last week and still do today, but I understand how perception--unfair or not, that the majority of Maryland fans aren't real upset right now--might drive a negative response. I think this hire deserves the benefit of the doubt, though.

What seems clear is that Yow is active, assertive, and forceful, perhaps to the point of micromanagement. That's worrisome, but it's a long-term consideration that I don't think matters right now. The last thing this department, disheveled as it is, needs is someone who pussyfoots around, overly concerned with stepping on toes. So I give Billy Randy credit for hiring an AD who has a long history of doing nothing of the sort. I think a little ass kicking will do us good, and if it rubs some folks the wrong way, I can live with that. I guess my main thing is: let's get our stuff together in whatever way it takes and worry about interpersonal consequences (which I don't think are a given, by any means) later.

One other note: here's a look at Maryland's finish in the Directors' Cup since 1994: 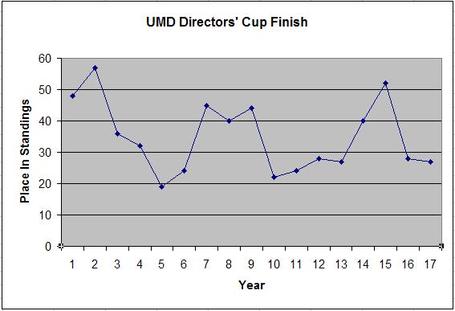