What Central Florida did to us on the field the last time we met was bad enough.  In retrospect, maybe the outcome wasn't all that surprising, though the first half certainly was.  But we should have seen it coming, and that's where you come in.

Watch these guys get housed in a theoretically meaningless drinking game:

UCF Chick absolutely takes NCSU Guy to the woodshed on the first leg, which is both sexy and unacceptable.  Anyone who's ever played flip cup knows the importance of the end positions as both tone-setters and pivot points. The starter gets her team off to a fantastic start here, exemplified by the expert  "why yes I will chug this beer and maintain a modicum of coordination!" way in which she attacks the cup.  On the other side, everything that can go wrong does go wrong.  You really hate to see that.  Let's break it down: 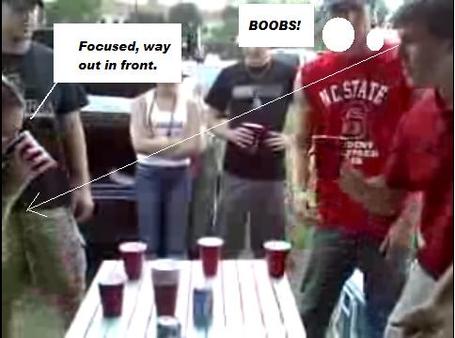 I don't even know where to start with this guy's appalling mechanics.  Eyes on the prize, man. While you're looking everywhere you shouldn't be, UCF Chick is taking you to the woodshed. 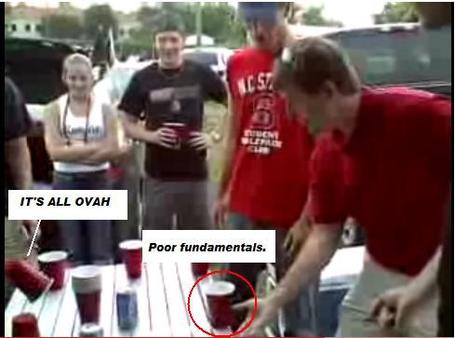 This is the critical moment--it's probably over, but there's a chance for recovery.  That is until dude makes his first placement and leaves himself without a portion of the cup's bottom hanging over the table's edge.  UCF Chick's cup is already headed for paydirt; meanwhile, our guy still has to re-adjust before he can even make an attempt.  Flip cup's just like baseball in that you gotta set the table for your cleanup guys.  Sadly, NCSU Guy's poor teammates are left with an irreclaimable situation.

You just can't make mental errors like this and still expect to win.

So. It's up to you, Florida Wolfpack Alum Planning On Attending The UCF Game.  It's up to you.  The game's less than two months away.  Get to work.