Share All sharing options for: Mike Archer Forgot How To Coordinate Again

As the defense struggles to stop anybody with a pulse (though I don't love their odds against a team of zombies either), it's no surprise that Mike Archer is back in the crosshairs. I hope he was able to kick back a bit in 2010, maybe have a few of those drinks with tiny umbrellas in them. Because now he is the problem again. It's just like 2009 except without all the losing to Duke.

I decided to take a look at Archer's track record as a defensive coordinator since I couldn't remember much beyond the fact that he wasn't very impressive at Kentucky. But in fairness, how many guys are impressive at Kentucky? Here's how his defenses have fared in a few per-play categories, including this year (click to embiggen): 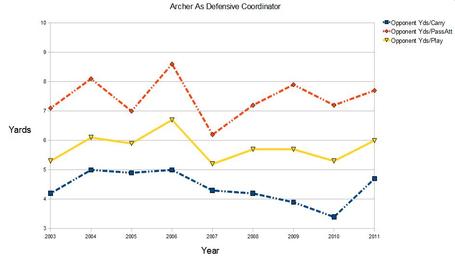 That yellow line, which hovers close to 6.0 more often than not, is particularly underwhelming, but it's all not good. It's enough to make me wonder what was so desirable about Mike Archer other than the fact that Tom O'Brien had worked with him before. Kentucky finished 102nd or worse in total defense in each of Archer's last three seasons there. Could be TOB was just doing him a solid. Maybe he accidentally built a house in one of those dry counties.

From my drunk layman's perspective, though, it's hard to figure just how much blame is deserved in situations like this. I think we can all agree that Archer isn't a great defensive coordinator, but how do you discern the difference between average and terrible while adjusting for the talent on hand? Exactly how much fault is the right amount of fault? What is the difference in terms of marginal value between the best and worst coordinators in football? These are questions I struggle with. That said, if you handed me a pitchfork, I'd probably join the mob.