Share All sharing options for: You Can Help NC State Football 'Get Rolling' With A Donation To Operation Acquire Atlasphere

Sure, bubble wrap could help prevent certain minor injuries, but I think we can all agree that Tom O'Brien's program needs something stronger. Something with a hard outer shell. I submit that the football team could practice in those huge metal spheres they used in American Gladiators. There are a couple concerns here, though. 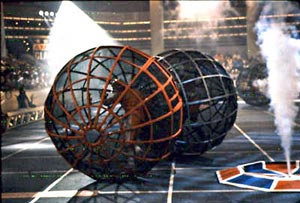 First and most obviously, this would be prohibitively expensive. You'd need like a hundred of these things, and unlike, say, that one Natalie Merchant album you swear you never owned, you can't just pop in to Amazon and pick up however many you need for 50 cents apiece.

Given our current financial situation, which does not even allow for proper media guide editorial oversight, much less a whole lacrosse team or a bunch of giant metal balls, a major fundraising drive would be necessary to equip the football program with atlaspheres. But think of the savings on major surgeries!

Secondly, it would become far more difficult to identify who is doing what, or why they're doing what, or where in the hell they're going. This is really more of a concern for the coaching staff, though. Figure color coding will go a long way, and then they can just make sure the necessary signage is placed inside each sphere. And the practice field is already fenced in, so that's a help. If Tom O'Brien can't figure out which was his pulling guard-sphere on a particular play, well, we've done all we can.

That's my short-term plan. Beyond that, I think it's only a matter of decades before we have those personal shields like they had in Dune, except ours will look way cooler than how they were imagined in the early 1980s.