Among the ACC's power moves...

"We always keep our television partners close to us,’’ [Boston College Athletic Director Gene DeFilippo] said. "You don’t get extra money for basketball. It’s 85 percent football money. TV - ESPN - is the one who told us what to do. This was football; it had nothing to do with basketball.’’

DeFilippo does not deny that BC opposed the inclusion of UConn.

Is that true, Gene? Or did it take a phone call from one "Andy Schmedsall," a self-proclaimed representative of ESPN The Television Contracts, to persuade you to oppose the addition of Connecticut? It's the year of sabotage in the ACC, after all, and as soon as the league office can find a country music song to that effect, every fall Saturday is going to feel a bit backstabby. 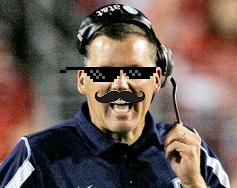