Yeah, it's a rebuilding year for Morehead State, that's for sure. By the looks of things Sunday night, they've got a hell a lot of work ahead of themselves at the defensive end, among other places. They played zone for most of the night, which is not surprising given their limitations and NC State's three-point struggles last season. But they were totally incapable of keeping NC State honest or forcing ill-advised shots from outside. And we grabbed one out of every two shots we missed anyway.

That's largely a credit to Lorenzo Brown and the rest of NC State's offense; the guys saw the floor well, moved without the ball, and kept the ball moving as necessary. Richard Howell and DeShawn Painter were virtually unstoppable inside and combined to make 17 of 19 field goal attempts. At one point during the telecast they were showing highlights of Howell's game, and he must have had 6-7 shots that were dunks or layups. No idea how many he ended up with, but it was that kind of night. Everything's a lot easier when you're getting looks like that. For the game, NC State hit 25 of 31 two-point attempts.

The Eagles were slow, their positioning was bad, and they were killed in every conceivable way. We beat them with interior passes. With precise passes from the perimeter to the basket. With Scott Wood threes. It was all working for NC State's offense, and to say they busted that zone would be putting it mildly.

The Pack put together their most efficient offensive performance since November 2005 2004. (It was during the '05 season. Reading comprehension fail on my part.)

A big key was right there on Gott's whiteboard: "Move the Ball -- Hot Potato!" They followed through on that one. 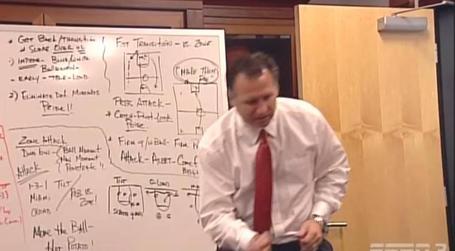