Ending Those Troubles Down The Stretch

Share All sharing options for: Ending Those Troubles Down The Stretch

NC State had a hard time closing out an improved NC Central team on Sunday afternoon, but the Pack managed to hold on despite a regrettable offensive performance down the stretch that saw the team hit 56 points with 9:57 to go and finally break 60 with 35 seconds left. Richard Howell ain't that worried about it, and given that there were so many good looks missed over that stretch, I can't say I blame him. As Sidney Lowe would say, you gotta make shots.

"We definitely don’t feel good about the type of win, but we do feel good that we won the ballgame," State junior forward Richard Howell said. "We have a couple of errors we need to fix to finish the game out later in stretches. But that’s something we can fix pretty easily."

But it was more than simply missing open shots--we were also too lackadaisical and soft with the basketball, which led to turnovers against Central's spirit fingers zone defense. We are going to have to get a lot tougher to beat the Jade Scorpion and Syracuse.

Essentially, there needs to be more beard. Always more beard. If more beard doesn't help, then I'm not sure of an answer. Here is the breakdown in flow chart form: 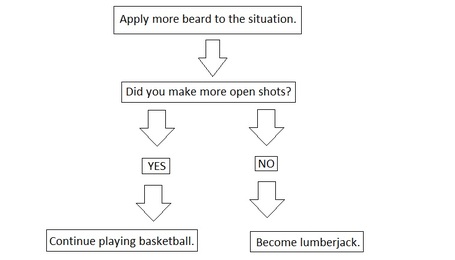