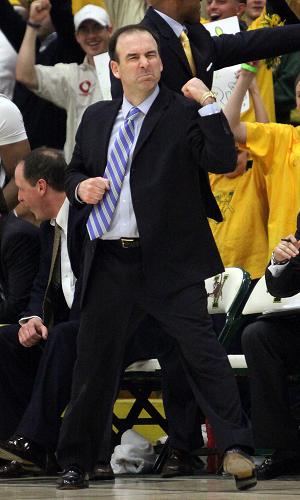 Latest in the series, first since the dumpster fire of a season finally extinguished (by lack of fuel).

You know the deal by now.  Today's contestant is one of the most successful of all the profiled coaches so far-and most likely the most obscure to date.

Mike Lonergan is 45 years old and is currently the head coach at the University of Vermont (UVM) in his sixth year leading the Catamounts of the America East Conference.  All told Lonegran has 18 years of head coaching experience (that’s one more year than our current cabal of Sidney Lowe, Monte Towe and Pete Strickland)- at 45!!

Simply put, yes and no.  Lonergan got his first head coaching gig at 26 years of age for Catholic University in Washington, D.C..  His teams consistently made it further in the NCAA Division III tourney each year with the pinnacle of his tenure coming in 2000-01  when they won the National Championship. Lately he hasn’t been able to duplicate the feat as he has put UVM into the Big Dance (2010) when they couldn’t pull off the #16 vs. #1 upset of Syracuse.

Yes.  Catholic has been playing roundball since 1910 and they never came close to the consistent level of success and banner hangin’ that Lonergan brought them in his 12 years there.  Still the only coach in team history to knock of a Division I team (Albany). BTW, he had no scholarships to offer for a private school that cost $36,000 and had no full-time assistant coaches (Do we?!).

Yup. At "Groovy Uvy" (ok, I have to disclaim that my family all graduated from the New England school), they were coming off a miracle season under long time head coach Tom Brennan when they went on to knock off the ‘Cuse with a team led by 5 seniors.  But the Catamounts had been a perpetual middle of the road venture playing in an obscure conference.  Lonergan has upped the ante and then some with three regular season Championships (including this year), three Conference tourney finals, one Conference Tourney Championship, one NCAA tournament, one CBI, and soon to be two NIT appearances- How ‘bout those Apples Sid!!

Not that the breaks are coming to a screeching halt but you had to know something was coming down the line.  Spent only one season (’04-05) under Gary Williams before being offered the UVM job.  Was also assistant to another nationally obscure coaching legend, Jack Bruen, at Colgate.  There he was the recruiting coordinator for a team that went from having less fans than team members to consistent NCAA tourney dancers from the Patriot League.

Sure- except that after clinching the regular season championship with a week left in the season they lost in the AE Qtrs, thus the automatic NIT bid. Guess they lost their edge.

Pumpin’ the brakes again…granted, Catholic and UVM.  Did recruit Forward Joe Trapani to come to frigid Burlington Vermont before he left for greener pastures at Boston College.  Wait, Vermont is the "Green Mountain State"- WTH Joe!?

Most surely not. High percentage shot selection, offensive boards (as high as #1), and free-throws (last season seventh in point contribution from the charity stripe).  The tempo is mostly up-beat which does create the one wart on his team’s stats sheet in having more TO’s then you would like to see.

Coached at Maryland under than AD Debbie Yow. So he’s got that goin’ for him…which is nice.

Coaching a D III team and an American East program that rocks a stadium with stands on one side of the court for a sell-out of 4,035 is hardly considered priming oneself for the ACC and beyond.  Teams fell to BYU and College of Charleston this year but there is evidence that he knows how to pull out a W at the larger stage and he regularly sets up the likes of Florida and UConn in early season affairs.  Scalps include Colorado, George Washington, Rutgers, and BC on the road back in 2007 when the Eagles were #14 in the AP poll at the time.

If  you’ve made it this far than thank you, or something.  That same year Lonergans’ Cat’s took down Principal Skinner’s squad of ACC mis-fits – oh, you guessed it, Lowe and the Wolfpack laid a big egg on Chestnut Hill.  Not that that proves anything other than I’m tired of even thinking of Sidney Lowe as pertains to the trade of basketball coaching.

Good chance of a yeah.  Defense is what Herb is best known for and Lonergan has proven that he can handle that part and mix in other of the big four statistic factors to round it out.

Ofcourse, unless he cares what Gary Williams thinks of Yow-which he doesn’t.

Great.  Remember that dude in the Summer Olympics in Spain forever ago who shot the fire tipped arrow over the towering torch to kick off the ceremonies? No, OK.  Well if you do I foresee the "A" list coaches as torches that someone forgot to twist the propane tank to "on".  This is a favorite of the "B-sides".

Does it really matter?  We don’t believe that we’re a "loonie" fan base and it’s for the most part entirely true that we aren’t.  But apathy sucks man, it really does.  I mean…it really, really does.  We just don’t care as long as we get some good results before Sarah Palin is anointed the first female Pope.