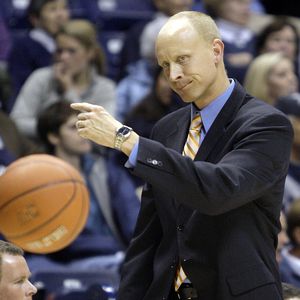 Previously on Profile Of A Possible Savior:

No.  He made the S16 last year in his first season as coach, though.

No.  Obviously Xavier has a long history of success under 6 coaches running now.    Sean Miller finished first in the A-10 for three years running before Mack; Mack has continued that streak in his first two seasons.

See above.  Mack has maintained the high level of success at Xavier.

Yes.  He was an assistant at X before following Skip Prosser  to Wake.  He spent 3 years at Wake before signing on with Miller at Xavier as an assistant again (more on that in a minute).

Yes.  For next year he has Dez Wells, a top 50 player from WOG in Raleigh (the alma mater of CJL and John Wall) committed.  He was involved in recruiting some of Prosser's better classes at Wake. Reasonable to think that he could translate that to our gig (a job that anyone can recruit well at).

Tangent: If there's one myth that bothers me most about our job, it's the myth that you cannot recruit here.  Sid Lowe comes in with zero college experience and immediately lands JJ Hickson and Tracy Smith.  Herb recruited at least 3 McD AAs here and another 1st round draft pick, and tons of other top 100 players.  EVERYONE who has coached here besides Les has recruited many high level players.

No.  Tought to get a read on their offensive style from Ken Pom's numbers.  This year 190th in tempo, last year 40th.  This year shooting only 33% from 3 and taking very few, last year making and taking far more.  I have not watched them play.

The Wake connection, and his good recruiting in NC as exemplified by Wells.

Random positive:  I spend more time than I should reading about sports (and other stuff) on the internet.  It's an easy release for me:  I have a job where I work a lot and I have irregular hours, so structured hobbies/extracurricular activities are tough.  Anyway, because of this I have a belief in the internet "buzz" - that is,  if you see little tidbits posted in several places from several sources, then there's a good reason to believe there might be something factual there rather than just noise or BS.  One instance is the persistent buzz linking Sean Miller to our job, which in combination with things I've heard off-line gives me a sliver of hope that he might come here.

With that predicate, the general "buzz" around Mack seems strong.  I've seen several people comment that this is a guy who has his [stuff] together, does not back down from anyone, and knows how to recruit.

Negative:  He's an alum of Xavier.  See below.

Also:   I would make references to Mark Morrison's "Return of the Mack" song for the entirety of his tenure, like I did above.  That may be a positive or negative.

Out of respect to Sid, and all he's done for our program as a player (mainly) and as a coach (less so, but still something), I'm not including this question in future profiles.  You can safely assume that EVERYONE profiled by me, Leewolf, Steven, or whoever, will be able to win more than 6 ACC games at least once in the 5 years of his tenure.

The last 5 Xavier coaches have left for greener pastures:

Bob Staak went to Wake and was one of the worst coaches in ACC history.

Pete Gillen had decent success at Providence and parlayed that into the Virginia gig, which was a disappointment except in the press conference quotes department.

Skip Prosser had an up and down tenure at Wake, but mostly up, before his tragic passing.

Thad Matta has built an absolute powerhouse at tOSU.  (Interestingly though - people up there really don't give a shit.  My best friend at work is a die hard Buckeyes fan from birth, obsesses over their football team, but when basketball rolls around he's like, "oh, I think I should watch one of their games, I hear they are pretty good."  ARrrrrrggggh.  I want to, (and have) screamed at him "DO YOU KNOW HOW MUCH I WOULD KILL FOR THAT!!!!231231!!!!1").

Sean Miller looks to be on his way to doing the same at Arizona.

Given that Mack seems to be well on his way to at least replicating Matta and Miller's success, along with the very positive reviews of him, I think it's reasonable to believe that he is a better coach than Herb.  Not certain of course.  And in the interest of full disclosure, I don't have that great of an opinion of Herb.  I think BJD95 at SFN has it exactly right:  He is a B- coach.  Better than the D- coach we have now, but there are many, many who would do better here.

And here we get to the real rub.  The history of Xavier coaches above certainly suggests that he would.  Coaches don't stay at X; they move up and out.  Our job is as good of a job as the coach at Xavier can reasonably expect to open up and get hired at.  Of course we pay more than Xavier.  Of course our potential, as an indisputable top 5 ACC gig, is higher than Xavier.

But Mack is a Xavier alum.  He's made a lot of noise about wanting to be the guy that stays there and ends the trend of coaches exiting for "better" jobs. He's proven his bona fides in this regard by leaving an assistant job at Wake for one at Xavier (though on the flip side, that might have involved a "promotion" to top assistant/heir apparent - I don't know).  He's not that far off from having a real contender at X now, and he may reasonably believe that if he can recruit the likes of Dez Wells to Xavier already, why leave?  And in any case, two years may not be long enough of a stay at his alma mater for him.

I could see it going either way, but if I had to bet on it, I would bet that he stays.  And that makes me very, VERY wary of us even pursuing him at all.  About the only way that this coaching search could go badly for us is if the head coach of a mid-major turns down our job, and it leaked (and of course it would leak - someone always talks).  Regardless of the reasons, it would "vindicate" the flaming we've gotten from ass clowns like Gary "Fat Hobbit" Parrish and the rest of the CBS Sports douchebags and suddenly its 2006 all over again and Yow is down at Lake Gaston losing 30 pounds.  AAAAahhh God kill me now.

IF, leaving my fears above aside, he did take the job, I'd be fairly scared.  Buzz/pedigree aside, he doesn't have much experience.  I think there would be a learning curve, and right now I don't want a damn learing curve - I want someone who already knows how to win.

IHow would the fan base as a whole feel if he were hired?

I think it would be very positive.  All but the most delusional Sid lovers (a few still exist) just want something new, and you wouldn't have to sell people too hard on "Thad Matta...Sean Miller...Chris Mack."