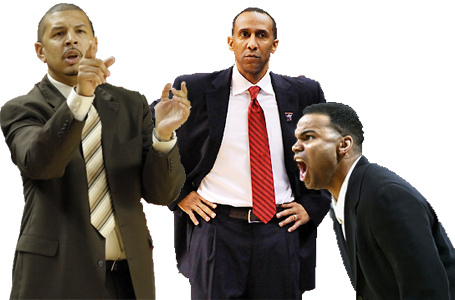 Capel via NewsOK, Dawkins via SI, Amaker via SI

As a lifelong State fan (whose basketball memories sadly start with the Les Robinson era), I thought I'd build on TVP's work today and throw out a few more names in the coaching hire. A co-worker of mine and I have been marinating on going Vic Bubas style (but in reverse) for a few months now, and we keep deciding it could be a really good thing.

The three candidates we've discussed are Jeff Capel, Johnny Dawkins and Tommy Amaker. They are pretty similar in that they played guard at Duke, experience as an assistant at Duke or elsewhere, head coach for at least one major college, etc., which is why I've combined them into one post. (While I too think Mike Brey could be a good hire, I doubt he is leaving Notre Dame to come to State. Also, if we hired WoJo or Chris Collins I might finally retire my fandom). So, before anyone yells in outrage about hiring a Duke guy, let's think about it like the rational fans we are.

Capel - His playing career is probably the weakest of the three, but Capel reached a NCAA final his freshman year and is best known as a player for hitting the second-most famous shot by a Duke player. As a coach he had success at VCU, taking them to the NCAA tourney. Since his hiring at Oklahoma in 2006 he started slow, but reached the NCAAs in his second year, followed by an elite 8 appearance in his third year. He has however taken a step back the last couple seasons.

Dawkins - His playing career was stellar, with him reaching the NCAA championship game and being named the player of the year. As an assistant coach at Duke he was on the staff from 1998-2008, which includes one national championship, one runner-up, one final four and five sweet 16s. As Stanford's head coach the last few seasons he has been average, with his teams hovering around .500 overall and 6-7 conference wins each year.

Amaker - He had a solid career as a player, reaching a NCAA final as a junior and sweet 16 as a senior. As an assistant at Duke from 1988-1997 he was on the bench for Duke's period of dominance in the early '90s as they won two championships, two time runner-up, and another final four. As head coach at Seton Hall for 4 years he reached the NCAA tournament once, advancing to the sweet 16. As head coach at Michigan for six years he did not make the NCAA tournament, but some of that can be attributed to Michigan's post-season ban. He did win an NIT championship during that time, however. As head coach at Harvard for the past four years their record has steadily improved, with Harvard sharing the regular season title this season.

Capel - At VCU he led them to the NCAAs for the first time in 8 years and set the stage for Anthony Grant to have success once he took over the program. At Oklahoma Kelvin Sampson had obviously laid all the ground work for a successful program before he decided he liked texting a little too much.

Dawkins - As a player he was Coach K's first big time player, but as a coach, no. Stanford is obviously an established program.

Amaker - Seton Hall, no. Michigan, had to reload under self-imposed penalties, but no, it's Michigan. Harvard, his predecessor Frank Sullivan had gotten Harvard to a yearly .500 or so team, but Amaker has quickly taken Harvard to a higher level.

Dawkins - No (next year would be his year to show if he has what it takes).

Amaker - Seton Hall, he got them into the postseason and turned his success into the Michigan job. Michigan, initially yes, but leveled off. Harvard, yes.

Capel - Yes, although as stated above, Oklahoma has dipped the last couple seasons.

Amaker - I'm going to say yes with Harvard's success this season. He was fine at Seton Hall and would have been in the NCAAs if allowed in the post season at Michigan.

All Three - See above. All have been head coach at a major college program and have played and/or been assistant coach at Duke.

Amaker - Yes, tied for the regular season title in the Ivy League.

None of the three have had stellar defensive ratings from KenPom outside of Oklahoma's rating in the 08-09 season, but overall they are usually in the top 1/3 of college basketball.

Dawkins - This year's freshman class was ranked #16 by Rivals and included a 4 star and a 5 star.

Amaker - Had highly ranked classes at Seton Hall and Michigan. It's hard to recruit to Harvard, but he's obviously doing something right there.

Capel and Dawkins - Eh, their offense is struggling this season, and in my opinion, consistency is of the utmost importance in terms of performance. Dawkins has dropped lower in the KenPom offensive rankings each year and Capel (minus the Blake Griffin monster year) has not done as well.

Amaker - Harvard has a fairly up-tempo offense this year and has improved by leaps and bounds each year in their KenPom offensive ranking.

Capel - Negatives would be the dropping off the last couple years and possible player scandals.

Dawkins - You'd think he would have done something notable in the Pac-10 this year, especially at Stanford, but they are young and it's still early in his coaching career.

Amaker - A little lackluster record at Michigan, although as said before it wasn't the most ideal situation. Also, Harvard has had some minor violations while he has been there (oh no, a pick-up game with a recruit, where have I heard that one before).

Out of respect I will also refrain from answering this question, especially since it seems it is all but officially announced he is just about gone.

Yes, and here is where I get to say why I think a former Duke guy would be a good hire. All three would be pumped to play Carolina every year. They would be motivated to take on Duke. They know the ACC and have the college background to back it up. I don't know of anyone who doesn't associate Duke with winning (as much as we all hate to admit it). And, when Dawkins and Amaker were in school State was actually good, so they can also speak to the "I miss the good ole days when State was good" crowd.

I'm not saying State should try to be Duke-lite, but everyone should be so lucky to have a team that plays defense and tries hard for the entire game like Duke (this is the most maddening part of being a State fan - watching a school down the road be able to have teams that hustle for an entire game). Obviously none of the three are Coach K, but I would think if you had two candidates that are fairly equal in experience, why not take the guy with added positives I list above?

Capel - Maybe. If he isn't in any trouble right now with Sooner fans I'd think he would likely stay there.

Dawkins - More than likely not. Especially if he really is the coach in waiting at Duke.

Amaker - I say yes, but who knows, Harvard has a lot more grass on their campus than State.

As my co-worker pointed out. What State should do is figure out who Duke would hire as K's replacement and then not get that guy. Getting someone with a finite amount of time, especially if it's only a few years won't help our situation any.

All three - I'd be intrigued. I'd be interested. I'd be willing to bet the RBC Center actually sells out for once. I'm still not sure how I'd rank them in terms of excitement over the hire. Going into writing this I would have said Capel, Dawkins, Amaker. But now I'm not sure. I think I want to say Amaker first, just because I think he has a better body of work than Capel, is a solid recruiter, and less likely than Dawkins to be the next Duke coach.

Here is where I plead for rational thought. The one thing no one wants is a Carolina guy, but I think the fan base would understand the hiring of a Duke guy. It's not like there is some former State guy (who is actually qualified) out there just waiting for his dream job to return to State, so we wouldn't be pushing one of our own aside for a Duke guy.

Overall, I've had mixed reactions from different State fans when I've floated this out there. So who knows. Answer the poll below and we'll see what the popular opinion is.

Who would you choose?