I took a general look at Mark Gottfried's overall accomplishments in his savior profile, so I'm going to start digging a little deeper, beginning with this post on his Alabama teams' performance in SEC play. In future installments I'll break down the components of his offenses and defenses and examine more specifically what did or did not work.

Offense And Defense In The SEC

Below I have charted Alabama's year-to-year offensive and defensive efficiency in SEC games only, with a baseline league average included for context. (Click the image to enlarge it.) I threw out the 2009 season since Gottfried quit after the fifth league game. 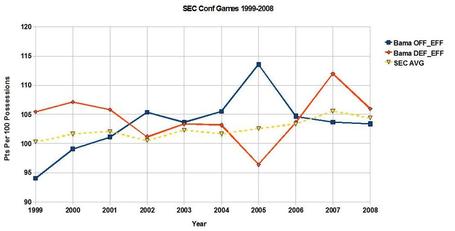 Here are the numbers from the chart:

Gottfried's offenses progressed steadily to the point where they were consistently better than SEC average (though not significantly so, with the exception of 2005). As the chart illustrates, he brought them up to a level in the 103-105 range and pretty much held it steady there for the rest of his tenure. His five NCAA tournament teams had offenses better than league average, and his teams were at least within shouting distance of average in four other seasons.

His defenses improved as well, though the progress was more gradual. He didn't have an above-average defense until his seventh year. As his program fell apart, the offense held steady but the defense declined significantly. Just two years removed from an outstanding defensive performance in 2005, his team was allowing a Miami-esque 1.12 points per trip.

One thing I can do with these offensive and defensive efficiency numbers is estimate the number of conference games Alabama should have won in each season based on Pythagorean expectation. (This is the core of Ken Pomeroy's ratings.) Gottfried's teams exceeded their expected win total six times, most notably in 2002 when the Tide won 12 games while performing like a 9-7 team. That squad earned a #2 seed in the NCAAs, making it one of the most egregiously over-seeded teams in the last ten years. Given their true performance, it's not really that surprising they lost in the second round that year. Most .500ish teams don't last very long. But I digress.

His 2005 team also won 12 games and was much, much better. Their efficiency margin was actually better than that of Kentucky, which won the league with a 14-2 mark.  And this Crimson Tide team couldn't even get out of the first round of the NCAAs. Of all of Gottfried's teams, this was the one best positioned for a deep run. Instead it was the less impressive 2004 group that reached the Elite Eight. Go figure.

All told, Alabama was expected to win around 76 league games from 1999 to 2008, and they won 81. That +5 could perhaps hint at some coaching impact, but I'm not comfortable drawing any conclusions there.

From a performance standpoint, Alabama's five year NCAA tournament streak looks quite a bit like NC State's run over those same five years. Like State, Alabama had one breakout year (2005)--which was far more significant than State's '04 breakout--and had the profile of an 8-8 or 9-7 team the rest of the time.