I started my analysis of Gottfried's Alabama offenses with a look at shooting percentages and free throw rates, and now to the other two factors: offensive rebounding percentage and turnover rate. In that last installment I noted that Alabama's average conference rank in terms of overall offensive efficiency (or points per possession) was 6.3, over two spots better than their average rank in eFG% (8.6).

Since shooting percentage is by far the most significant factor and his offenses performed better than their shooting would imply, they must have been strong in other areas. One area: free throws. The rates at which they drew and made free throws consistently ranked near the top of the SEC. Another: offensive rebounding.

Look What I Found, Coach

Alabama led the SEC in offensive rebounding percentage four times in Gottfried's 10 seasons and finished in the top half of the league a total of seven times. They never finished lower than 9th, never grabbed less than 32.5% of their missed shots in any season. 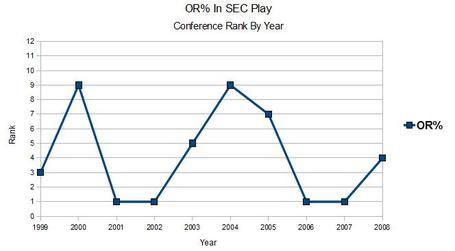 Certainly they got enough practice with all of the shots they were missing, and it's good to see no obvious signs of Chronic Brick Fatigue Syndrome here.

Better than league average in eight of 10 seasons. Even as the overall quality of Gottfried's teams went down hill, offensive rebounding remained a strength of his offenses. At NC State, he inherits a couple of very good offensive rebounders in CJ Leslie and Richard Howell, so it is conceivable that State becomes one of the ACC's best offensive rebounding teams in year one. And with shooting accuracy a question mark heading into 2011, it would really help a lot if that came to fruition.

Turnovers plagued Lowe's offenses, and that contributed to what was often a substantial negative turnover margin because of State's indifference at the defensive end. Gottfried had a similar problem throughout his tenure at Alabama, though it tended to be less pronounced. 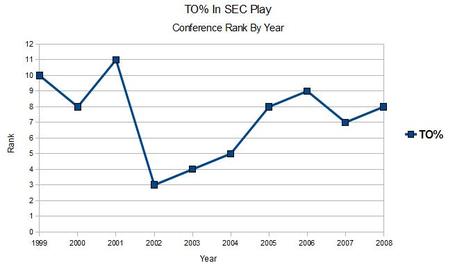 Just three top-half finishes in 10 years, but after the first three seasons, their turnover rate tended to be high but never reached an extreme, crippling level. So that's something.