Russell Wilson Visiting With Auburn's Coaches (Or Not)

Share All sharing options for: Russell Wilson Visiting With Auburn's Coaches (Or Not)

According to Joe Schad, Russell Wilson traveled to Auburn on Monday and is meeting with the coaching staff today, which at the very least confirms that he is seriously considering going back to football this fall:

A person close to Wilson said the quarterback arrived at Auburn on Monday night and would spend all Tuesday with coaches in an effort to get to know them and the offensive playbook and scheme used by offensive coordinator Gus Malzahn.

Wilson has no specific timeline to make a decision, other than the fact his days off from baseball will be limited next month.

"It's a job interview," the person close to Wilson said. "He's trying to figure out what to do with the rest of his life."

Heather Dinich is reporting that Russell will visit Wisconsin in June. The Tourists have an off day today as they prepare for a seven-game road trip beginning on Wednesday.

I commissioned the following detailed rendering in order to better prepare ourselves for the possibility that Russell Wilson will be Auburn's starting quarterback in 2011. 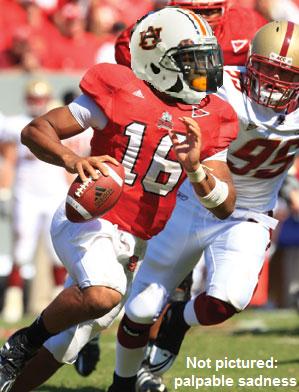 Update: Now this from the Opelika-Auburn News:

However AuburnSports.com reported, in the form of a message-board entry, that Wilson was not in town.

"He is not visiting Auburn today," the post said. "Not sure where that got started, but it is inaccurate."

The message board link (which is behind a paywall) is to Auburn's Rivals.com site.