Share All sharing options for: The Mark Gottfried Track Record: Offense Part I

In the first installment of this potentially excessive series on Mark Gottfried's track record in conference games at Alabama, I examined the overall picture. Today I'm going to start getting into some of the specific factors, beginning with his offenses.

Shooting Accuracy From The Field, Or The Lack Thereof

First up, how Alabama ranked in a few important shooting categories from 1999 to 2008.

(If it's not clear, this means that Alabama ranked 8th or 9th in the SEC in eFG% in an average season, and so on.)

As I've been combing through all of the numbers, a few strengths have become apparent. Shooting, unfortunately, isn't one of them. Far more often than not, his Alabama teams finished in the bottom half of the SEC in these three shooting categories (see the line chart below; click to embiggen).

His 2004 and 2005 offenses were pretty good all over the floor, but as you can see, those two years account for six of the seven occasions where Alabama finished in the top half of the league in these categories. Given the above I'm a little surprised at how often he was able to piece together offenses near or slightly better than the league average in terms of points per possession. Alabama's average conference rank by offensive efficiency was 6.3, a good two spots higher than their average eFG% rank, so clearly Gottfried's offenses had other strengths to prop them up. (Which I'll get to.) Unlike, say, Sid Lowe's early offenses that relied entirely on eFG%.

These figures raise some questions, because it's not like Gottfried was working with a lot of inferior talent during his tenure, especially the NCAA tournament years. Is there something systemic to his teams' underwhelming performances from the field, some failure of the high-post offense as executed by this particular coach? Does it have anything to do with the types of players he recruited?

While Alabama's accuracy from the field left a lot to be desired, they were very productive in getting to the line and converting free throw attempts. These were teams you didn't want to foul, because of their two- and three-point percentages as well as their free throw accuracy, and whether opponents recognized that fact or not, it never made a difference. This is an area where it's clear the offense was able to take advantage of an obvious strength 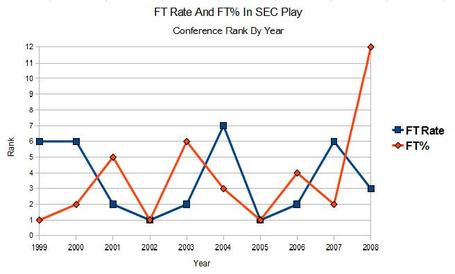 Ten times Alabama finished first or second in the SEC in one of these categories, compared to just a pair of bottom half finishes. That's a strong record. Just based on free throws and the other shooting categories, It's easy to see why Gottfried's 2005 offense was an elite unit in terms of efficiency. They led the SEC in eFG%, 3FG%, FT%, and free throw rate. They had a versatile bunch of contributors that year, led by Kennedy Winston. It's tough to fail when you shoot so well from everywhere.

There were a couple of exceptions, but you could pretty much count on Alabama to beat the league average in both of these categories. Gottfried's teams weren't interested in taking very many threes, and their focus on the interior paid big dividends here.