Share All sharing options for: Death From, Well, Everywhere

As you've no doubt heard by now, the Georgia Tech offense is having itself a really good season so far. The Jackets lead the nation in total yards per game (630.5), yards per snap (9.4!), and scoring (53.3). They have almost 1600 yards rushing through four games. The early-season schedule is a factor in that, but these extremes would be sure signs of improvement under just about any circumstances. Take a look at their output against teams they played in both 2010 and 2011:

What's really terrifying is this may be the most efficient passing attack Paul Johnson has had at Georgia Tech. While they didn't lack for big plays in the past but Josh Nesbitt was more boom/bust than Tevin Washington has been in 2011. Nesbitt never completed more than half of his throws as the starter and last year dipped down to 37.1%. This season, Washington has hit 64.3% of his attempts while averaging over 19 yards per attempt. And the latter number, like so many others associated with this offense, is just nuts. Here are a few more:

-- Orwin Smith has 349 rushing yards on 19 attempts. Hell, there are only five wide receivers in the ACC averaging more yardage per touch.

Here is one example of how Hill and the Tech offense rack up those big pass plays: 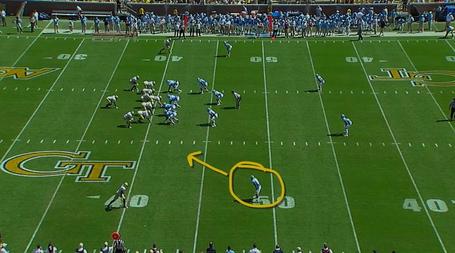 As Bob Davie's handy telestration illustrates above, the corner has run support duties and has his eyes in the Georgia Tech backfield. 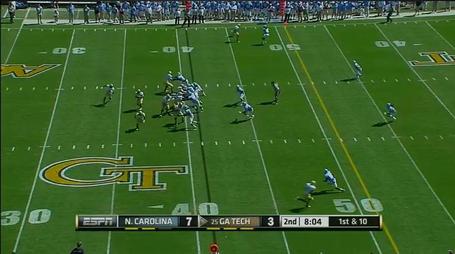 Pretty much as soon as Washington pivots to the near side of the field, it's all over; Carolina's corner bet on run the whole way, or rather, did what he was supposed to do and move up for support. 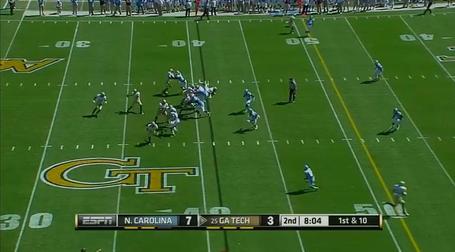 Washington is totally unbothered by the pass rush and about to let it go, the corner is in no man's land with no run to stop, and the safety has played himself out of position by shading toward the line of scrimmage while the play develops. That's how this happens.