This Week in ACC Twitterings: The Reveal Edition

I cannot hide my identity any longer.

Share All sharing options for: This Week in ACC Twitterings: The Reveal Edition

Welcome to your ACC Tweets of the Week post, where we highlight the funniest stuff said in 140 characters or less, about any and everything related to ACC Sports. Remember, send your suggestions here.

Folks, I'm tired. I just can't do this anymore. I've grown tired of this secret I've been dragging around.

Admit it, you guys have wondered things like: "I wonder who this fascinating fellow is?" or "He is so witty, I wonder if he is strikingly handsome too.."

Halloween got me thinking about this life. People walking around hiding who they really are. Here I am, guys. Part time volunteer blogger. Full time alcoholic. Sometime employed family dude. I mean really, Undertoe one minute, Jamie Famous the next. It's just silliness, I tell you. It's a real identity crisis, and I can't do it any longer.

That being said, I have decided to end the speculation, once and for all. Prepare yourself, folks, for I am about to show you an actual, recent picture of me, Undertoe:

.(I really miss the old format where I could use the jump to build suspense)

.(Tired of scrolling yet?) 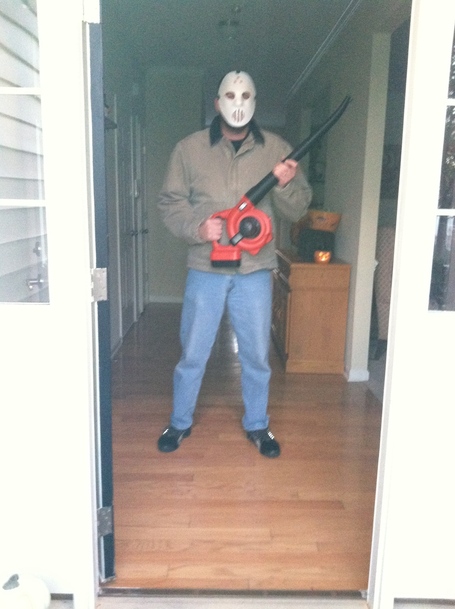 HAHAHAHAHA!!!! Come on man. Did you really think anyone would own up to writing this crap? You guys are so gullible.

Really, though, I had a lot of fun answering the door on Halloween with my battery powered leaf blower. (Suburbs!) Those little bastards took off screaming every time. Good times, good times. On to the tweets!

I don't want to stir up bad memories, but I have to share the funny stuff from last week, so we'll make it quick, like ripping off a bandage. Pregame:

@uncmemes Q Why do NC State grads keep there diplomas on there Dashboard? A so they can park in handicap spaces

Their, there, they're. And WE'RE the dumb ones.

Hehe. Later in the game:

NC State came is as 7 point dogs, lead by 3. Amerson pacing nervously on the sidelines.

I mean, if you can't laugh at yourself, who can you laugh at?

say what you want, but that little italian kid for unc played a helluva game.

Quality. And then, some genius came up with the idea of an ACC Halloween party. Check deez out:

Mark Gottfried's got a lot of work to do on his costume, which has a long way to go. #ACCHalloweenParty

MOAR HATE. These were all quality submissions, but as you all know, there can only be one winner of the Gold Star Tweet of the Week. Here is your honoree this week:

Very nice. Have a good weekend, everybody, and keep it between the ditches.