Well ladies (do we have any ladies on here? Just Debbie maybe at least?) and gentlemen, I present you with today's subject: Chad Morris, Offensive Coordinator at Textile Bowl rival Clemson.

Share All sharing options for: Profile of a Possible Savior: Chad Morris

A native of Edgewood, Texas, Morris has had a rapid ascent to BCS-level coaching and has turned heads at every stop along the way. Morris was a high school QB, and went on to college at Texas A&M. After 15 years of coaching high school football in Texas at 5 different schools, Morris finally made the jump into college coaching as the offensive coordinator for perennial job jumper Todd Graham at Tulsa. After just one year (2010) at Tulsa, Graham hit the road for Pittsburgh (and now is at Arizona State, yucking it up with He Who Shall Not Be Named), Morris landed at Clemson and has helped lift Clemson, and more importantly Dabo Swinney, from having another bumbling Tommy Bowden-esque stretch to real ACC title contenders (and winners).

Things We Need to Know, In Rough Order Of Importance:

1. Has he coached teams that have won a conference title, made multiple bowl games, and/or consistently been highly ranked?

Well, his high school winning percentage as a coach is 82%. And his teams won three state titles, and played for three more, at the schools he coached at. He also had teams at Lake Travis High School that went undefeated in back-to-back seasons. But in terms of college coaching....which is what our job is I think, he has nothing. Then again, his offense have been integral to Tulsa winning 10 games in 2010 and Clemson winning an ACC Title last year.

Knowing nothing of the state of the various high schools that Morris coached at, I would say that this is probably a no. Even his roles at Tulsa and Clemson provide little experience in the way of "build-up". Tulsa, while down when Todd Graham arrived from Rice, had experienced success prior to that under Steve Kragthorpe, and Clemson has obviously been a decent to good program for the last decade or so.

4. Does he have significant high-major experience as either a head coach or an assistant?

As noted, yes. His two years at Clemson count for that.

5. Any indiciation that he can recruit ACC-level (or above) talent?

Yes. While it is hard to tell, at times, exactly how much influence one coach has in recruiting, Morris and his offense have definitely been a draw for the Tigers. The Tigers have drawn top-notch, four and five star talent on offense...well pretty routinely. But Morris has had success in getting tall, rangy WRs that fit his style well, and has a 2014 QB in Deshaun Watson committed that could be one of the top QBs in that class. No doubt, Morris knows the value of recruiting (more on that later).

6. Is his team one of the best in its conference right now?

Again...by his team we will just say Clemson. And we all know the answer to that question: yes. While Clemson's offense was somewhat less-than-dynamic against South Carolina...and to some extent FSU...they absolutely throttled most of the rest of their schedule, including NC State.

7. Do his teams actually play, what is this thing called, "defense"?

N/A - As Morris has ZERO to do with the defense at Clemson, and had zero to do with the D at Tulsa, this is not a question that can really be answered.

8. Does his offense run more than five plays?

YES! Wow, do they. Clemson has multiple formations, shifts backs/receivers all over the field. And runs the ball well, in addition to passing it well. For those that won't watch the video posted in #10 below, Morris describes how his offense, unlike many traditional spread offenses, is not just about stretching the filed sideline to sideline, but about having an effective down-field passing game. And as we have seen first hand, Clemson definitely does this. Morris also schemes to put the ball in the hands of his playmakers, which this year was namely Hopkins and Watkins. Clemson's offense is currently 7th in the nation in total offense, averaging 518 yards per game. And their attack, while slightly more pass heavy, also averages nearly 200 yards rushing per game. And the Tigers put up a boatload of points. One thing that struck me when thinking about Morris was how the Tigers had the ability in 2011 in particular to come back from deficits. This is an offense that can grind you out on the ground if necessary, but can also score in a hurry.

And in case you were wondering, all of those offensive rankings are much higher than for the Pack (State was 45th in the nation this season, averaging 420 yards per game, including a pathetic 116 ypg on the ground).

9. Does he have any connection to NC State, the state of North Carolina, or the ACC?

NC State and North Carolina (other than aiding in recruiting), not so much. Prior to coming to Clemson, Morris was a Texas guy all-the-way. But the ACC connections are obvious.

10. Any other random red flags or positives?

I would advise watching this video to get a good feel for Morris, what his style is like, and to hear him talk about his offense and philosophy. I think he would be a good "fit" for the program and clearly has the style of a guy who is comfortable talking to the media and handling the that side of being a head coach. Morris also talks about how having been a high school coach in the past helps him in recruiting because he knows how to talk to high school kids, knows what their concerns are, what their parents' concerns are, and knows how to get in good with high school coaches since he has walked some miles in those shoes:

In terms of red flags, as far as I can find, there aren't any major skeletons in his closet. If he killed a man and/or slept with that man's wife, it hasn't made it onto the Internet.

Would he be better than TOB?

Not sure about this. While I think our offense would definitely be more prolific, surpassing TOB would come down to three things: better recruiting (which I think he could do), better staffing (which would be key and I would HOPE he could do), and having a better defense (definitely a question mark as he has no track record for hiring defensive coaches). Just a total question mark in my opinion.

Would he be better than Chuck?

Hard to say. Chuck's downfall was his inability to manage people, namely his coaching staff (i.e. keeping them around) and keeping players in-line. Morris has been a HC, albeit at a high school level, but there is no real indication at this point that he has this skill that Amato lacked. This is definitely up-in-the-air.

This is actually a good question. I would THINK so but not 100% sure. Morris already makes $1.3MM a year, and signed a 6 year contract with Clemson. He would have to get a significant pay raise to come here I think, and with the full knowledge he would be competing against better talent (that he helped coach and recruit) at Clemson. If a guy like him is turning us down then I think we may be headed for basketball coaching search danger zone, meaning Debbie better know some dudes who used to date her WBB players at Oral Roberts that coach football.

Decent. I think it is a risk to hire a guy who has never been a college head coach, and one that has had such a short career in college coaching period. But, I think he is a good "fit" based on the clips like the one posted above. The key to success is who he would hire for his defensive staff.

Probably happy but cautious. I think people would be excited about the prolific offense that Morris has, and given how the Tigers shredded us (and every other team in the league with the exception of FSU) this season, that would get people amped. I think it puts fannies (h/t to Chuck) in the seats next year for sure.

How old is this dude?

In odd symmetry with Sonny Dykes, Morris is also 43 years old. Maybe Deb is only going to interview people who are 43? Definitely limits the pool a little bit.

Still a pretty young guy who could have a long career at State if he was to be successful.

Judging by the first picture when doing a Google image search, on a scale from 1 to 10, with 10 being very confident, how confident does this picture make you feel that he can succeed at NC State? 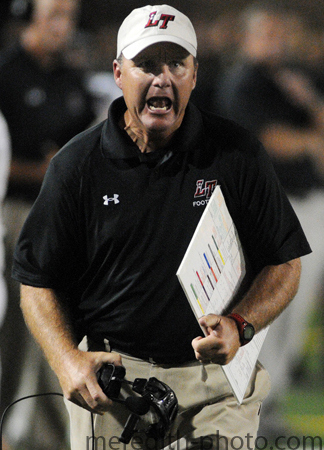 Well....the protruding veins in his neck are a little bit disconcerting, but it does show an intensity of someone that, I don't know, doesn't stare at the grass all game, crouch like he has to relieve himself, or do the proverbial mummy during games. This guy is wired, fired up, in the game, working the refs, and ready to charge through a brick wall. I'll give him a solid 7.5