As we head into the Sweet Sixteen, the pool standings remain tightly bunched, though there is one person in sole position of first place. In the top three, there are three different national championship picks, so this should be an interesting finish. And judging by the max points possible column, there are still plenty of people who can make up ground and get in the running. Including my entry, which is in 57th place. You know you're scared.

Anyway, now that I have finally received some (but not all) of the items that will go to the winner, I can show you what you might be receiving in a few weeks. I decided to scour eBay for some interesting collector's items--a game-used Billy Packer fountain pen, a game-worn Billy Packer tie, an autographed portrait of Billy Packer angrily discussing with Jim Nantz the inclusion of mid-majors in the NCAA Tournament at the expense of major-conference schools. Basically anything Billy Packer.

Damn internets let me down again. 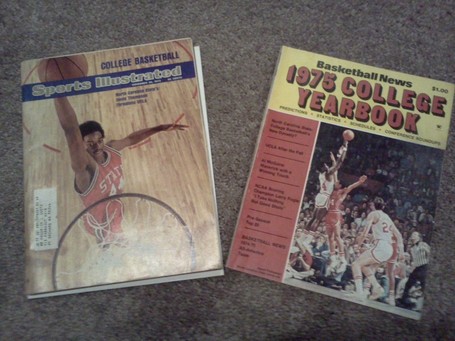 I did find some cool stuff, though, including an issue of Sports Illustrated from 1973 with David Thompson on the cover. Lots of good pre-season coverage in that one--did NC State have enough to dethrone powerful UCLA?--plus all the ads for menthols and liquor you could ever want. Honestly the ads are almost as much fun as the actual content.

On the right is the 1975 College Yearbook, which poses this question on the cover: "North Carolina State: College Basketball's New Dynasty?" That's DT on the cover of that one as well.

There's also one more thing that I haven't gotten yet, but was just too strange not to throw in. Good luck, everybody.