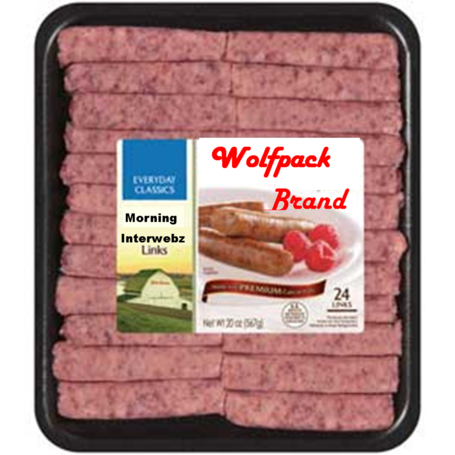 Hello again, sportsfans, and welcome to edition number 2 of your daily links of interest. The jolly outpouring of comments on the first morning story resulted in the creation of this abomination above, which at least makes some attempt at the breakfast link pun. Too silly? Not silly enough? You guys let me know.

And now, on to the links.

The huge news, of course, is Amile Jefferson's decision. You'll already have heard about that up and down by now and so I will pass over it for the news you possibly haven't heard about (and which is slightly less saddening to my heart).

Baseball shut out UNC-Greensboro Tuesday behind an incredible mid-week performance by Logan Jernigan and the continued heat of Ryan Mathews' bat. The Pack is now poised to enter the final weekend of ACC play against FSU with the regional hosting bid all but wrapped up (don't worry, I've knocked on wood with crossed fingers while spitting on the floor, NC State shit can't strike). FSU actually dropped the series to Clemson this past weekend, showing that they are indeed vulnerable - if the Pack could take the series from the 'Noles it would be a huge statement heading into the tournament.

Meanwhile in baseball news that nobody knew about somehow Elliott Avent was suspended from the game yesterday as well as two of three at Florida State. Apparently he got into an altercation with an official in the final game at Virginia Tech, resulting in a three game suspension as per NCAA rules. It didn't seem to have much effect tonight, and as far as baseball goes things seem to run okay without the head man most of the time, so I'm not too worried. Besides, getting into the fisticuffs seems like something old Elliott has to indulge in every once in a while to keep himself sharp.

In feel good news of the day, this WRAL piece tells the heartwarming story of Harrison McKinion, a ten-year-old Pack baseball fan who is battling with leukemia. Apparently the Wolfpack baseball team has welcomed Harrison with open arms, as he has become a regular staple in the dugout at Dail Park. At a time when Chapel Hill players are painting their fingernails and partaking in nonexistent classes, it's nice to know that we have the right kind of student athletes here at NC State. All the best hopes and prayers to Harrison.

Speaking of nonexistent classes, WRAL reports that the investigation at UNC has now taken a "criminal turn". The SBI has been asked to investigate fraud at the university, which is probably the best thing UNC could have hoped for when you consider the SBI's track record at messing up investigations. Either way, at least some attention is being shown to the scandal that academic authorities all over the state simply don't seem all that upset about.

LSU guard Ralston Turner has committed to the Wolfpack after his visit over the weekend, a move which some will remember I totally predicted when I linked to TheWolfpacker.com's headline which indicated that Susie told Rachel told Sally told Margaret that he actually like liked us. Stick with me, Pack fans - I'll show you the way.

Attendence numbers declined this past season for men's basketball despite our postseason success, which didn't really bother me much when I read that we were still in the top 25 in national basketball attendance and have been consistently, even through the Lowe years. You can take the Pack fan out of the basketball picture, but you can't take the....basketball...out of the....Pack fan....

It sounded better in my head.

Moving right into other hoops news State has been matched up with Michigan in the Big 10/ACC whatchimicallit for next season. Everybody already knew this but apparently it's news, so there you go, guy I just saw crawl out from under a rock. Yes you. You're welcome.

Olympic sport mention of the day: Given Debbie Yow's new commitment to excellence in the Olympic sports as well as the revenue-generators, I have decided that I will never post a links update without including at least one piece about those less-well-known Wolfpack athletes. Here is a very interesting feature about what the article calls "one of the top three Wolfpack gymnasts of all time", who also worked as a stuntwoman in the recent film "The Hunger Games."

In football news here is an ACC Sports Journal piece discussing the QBs of the ACC in 2012. It doesn't mention Mike Glennon nearly enough for my taste, but if you're looking for some reading to put off that work on your desk there, it's capable of destroying a good five minutes.

In more interesting and relevant football news, GoPack.com will be running a summer-long feature series on Tony Creecy's preparation for 2012 football. I TL;DR this earlier but it looks interesting, and I'll probably get back to it later.

In even more football news, Wolfpacker has another interesting recruit profile up behind their formidable paywall about a possible Wolfpack receiver recruit with "an impressive offer list". According to Yahoo! Sports, that list includes Florida and Southern California, so Wolfpacker's tantalizing statement that he is "taking a closer look at NC State" is exciting.

Russell Wilson is being given a chance to compete with Matt Flynn and Tarvaris Jackson for the starting QB spot for Seattle. Apparently Pete Carroll appreciates that there's more to being a QB then being tall.

Pack Insider has a great interview with Steve Smith, the high school coach of Tyler Lewis.

Wolfpack stars will be on hand at the annual Hope to Walk Golf Challenge, which Pack Insider describes here. Fans are instructed to come out and cheer their favorite Wolfpacker greats on to victory, and all for a good cause.

Finally PackPride has created a possible depth chart for 2012-2013. Notably absent is Amile Jefferson, which leaves a bit of a gaping hole up front after the departure of CJ Leslie and Richard Howell following the coming season. With Jefferson, I would have said the top ten preseason ranking was warranted - without, I'm no longer so sure.

Well there you go again. You've survived the second Daily Links post. Thanks for reading and, as always, Go Pack!