While UConn may have some problems with its interior defensive line, the Huskies have the best pure pass rusher in this game. Tom O'Brien has mentioned the kid with the track speed a couple of times this week, and his name is Trevardo Williams. Williams finished the 2011 season with 12.5 sacks, which earned him second team all-conference honors. And as TOB noted, he was one of the top 100 meter sprinters in New England during his high school career.

That speed off the edge is utterly terrifying, because this is what can happen: 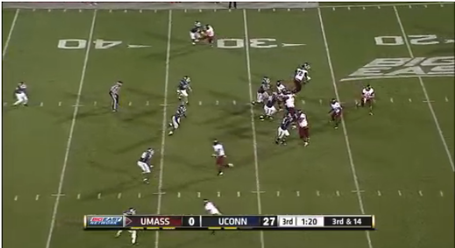 It's actually hard to tell if he's even touched by the right tackle during this play. The tackle may have had him in a game of tag here, but as this is tackle football, things end up working out rather poorly for that RT and the UMass offense.

Flying around that tackle...

While it figures to be a bit tougher for Williams to get in clean like this against an FBS team like NC State, he's already proven that he's skilled and speedy enough to make an impact at the highest level. Obviously Mike Glennon is no Russell Wilson when it comes to dodging bullets, so the awareness of State's offensive line is going to be a crucial factor in Saturday's game. If they lose track of Williams for even one snap, it could cripple a drive, or do something far worse.