Luring the five-star recruit up US 264 to Raleigh could pay future dividends with a 2015 class that is packed with in-state talent.

Share All sharing options for: UPDATED: Will Street Pave the Way? (YES!)

UPDATE #2: AS PREDICTED, STREET'S COMMITMENT PUSHES THE PACK INTO THE RIVALS TOP 25. THIS IS A NICE LIST OF PROGRAMS TO BE RANKED AHEAD OF: 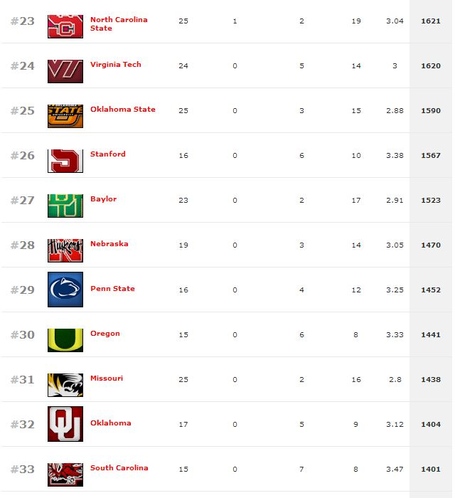 N.C. State's 2014 recruiting class ranking is hovering just outside the top 25 according to Rivals, which pegs the Pack 26th overall at the moment. If Dave Doeren can successfully shepherd everyone in the class to signing day and they all qualify, the Pack's first-year head coach will secure the most highly-regarded group for the program since 2005's class came in 27th. Even with a bit of attrition due to flips or grades, the Pack will settle solidly in the top 25 with the pledge of Kentavius Street, the Greenville Rose defensive end who sits at 17th in the Rivals top 100 prospects for the class of 2014.

Street, who is set to announce his intentions in late January, appears to be down to N.C. State and Ole Miss, the two schools he has officially visited (though he intends to visit LSU and Miami as well). If he opts to run with the Pack, he'll be the first member of the Rivals 100 to do so since Rob Crisp, who came in 13th in the 2010 class. Most pundits peg Street as the Pack's to lose, as playing close to home appears to be high in the pecking order of his wish list in a program.

Street's commitment would be important to the Pack for numerous reasons, none more obvious than the talent upgrade a five-star prospect should bring to a critical position where the program is thin beyond the serviceable-if-not-spectacular Art Norman, and Norman is a senior next season. Additionally, signing Street would also give the Pack staff momentum heading into the all-important race for the next class. A Street signing would almost certainly push the Pack past the likes of Baylor, Oklahoma State, Stanford, and Virginia Tech, the programs immediately ahead of them in the Rivals' team rankings.

After Doeren stumbled to a 3-9 season in his first year at the helm of a BCS program, it's important that he can sell the program's future, and Street headlining a top 25 class offers instant living room cred as the staff set their sights on a 2015 prospect list that is loaded with in-state blue chips.

On the same day Georgia defensive tackle Trenton Thompson tweeted that N.C. State had extended him an offer, Rivals came out with its 2015 top 100. Thompson is #1 on that list, and the Pack have already offered 20 of the top 100 with two more listing the Pack on their preliminary lists. It's refreshing after the Tom O'Brien years to see the new staff both identifying and pursuing top talent, but they did the same thing for the class of 2014 and, unless Street signs, they will strike out in their inaugural pursuit of five-star talent.

If Street inked with a program like Alabama, he would be just another ace in an already stacked deck, but his significance to the Pack could possibly be compounded far beyond his already appreciable worth. The 2015 list includes six NC preps: #19 Shy Tuttle (DT), #35 Jalen Dalton (DE), #57 Mason Veal (OT), #83 Bryce Love (RB), #89 Darian Roseboro (DE), and #92 Mark Fields (CB). All six already count an N.C. State offer among the many in their coffers. Veal and Love, as Steve Spurrier's luck would have it, are both USC-East legacy recruits (but at least Love's name is Bryce, not Brice). It may be difficult to unsheathe either from the Cocks, but Love calls the Raleigh area home and Veal preps in Charlotte, where the staff has made impressive inroads on the recruiting trail.

Could Street be the first domino to fall, paving the way for more of his five-star NC brethren to follow? Could his signing have enough sway to lure elite talent from outside the Old North State? If so, January 28th, the day Street dons the cap of his college of choice, could well be looked back upon as the turning point of the program.