(I love this photo so much I may use it on every post from now on.)

Richard Howell made this play happen by growing two sizes and making it impossible for any human to go around him. Brown had collapsed the defense with his drive, and there was nobody that could get in Wood's face to block or otherwise bother that shot save poor Rod Hall, who was expertly taken out of the equation by Rich. 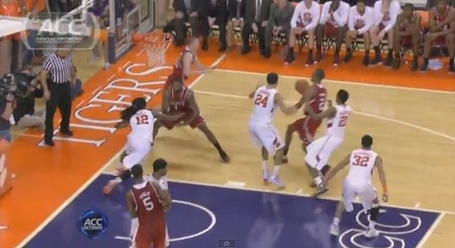 This one had the smell of defeat all over it until that final shot, but we've been on the reverse end way too many times already this year for me to care about that. It's nice to be able to take a win into a week-long break rather than having to stew over yet another close loss.