Share All sharing options for: Doritos, Pickle Juice, And Hot Sauce: A Lesson In Offseason Boredom

Doritos, pickle juice, and hot sauce. I don't even know where someone comes up with the idea to combine those three things into a theoretically edible snack, though that's what Frisman Jackson did. I assumed there was no way this could end well, but I figured I might as well give it a shot anyway***.

(***This is also my approach to watching all NC State basketball games.)

I followed the recipe to the letter and threw all of that shit in a container and just shook it up until the chips appeared sufficiently saturated with the pickle juice and hot sauce. The result, as you can see here, was a Dorito-tinted runoff of liquid that did not enhance anything whatsoever. 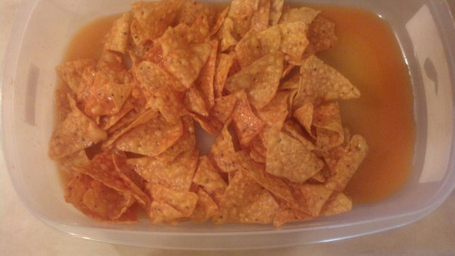 The Doritos quietly accepted their soggy doom, defenseless against the assault of liquid. The smell was... you know it wasn't that bad, really. I expected this to be horrible all the way around, but it actually wasn't. The end result was bearable. It wasn't what I would call good, but it wasn't retch-inducing, either.

Still, the idea that this is somehow a worthwhile snack is entirely preposterous. Unless Frisman Jackson has this down to a science such that the chips somehow retain their crispness--a notion completely refuted by his own description of the marination process--it simply cannot work. There is no place for this thing at any meal or anywhere in between.