Only three ACC baseball teams managed to open league play 3-0, and the Lady Pack sit atop the ACC softball standings as the only unbeaten team.

Only Clemson, Miami, and N.C. State survived the first weekend of ACC play unscathed. The Pack had their struggles in a Saturday doubleheader against Notre Dame but closed out the series with ease, cruising to a 7-0 win in the finale. The Irish didn’t manage to scratch out even a single run over the last 21 innings of the series as the Pack lowered their staff ERA to 1.95.

Despite a season that culminated in a trip to Omaha, the starting pitching behind Carlos Rodon was suspect for State a season ago. In its 13-2 start to this season (which is the top overall record in the ACC), State’s starting pitching has been unbelievable. In fact, the team is 11-0 in games where Rodon did not get the decision. Brad Stone followed Logan Jernigan’s 7.1 shutout innings from Saturday with six scoreless innings in the finale. Jernigan (0.73) and Stone (1.61) are both 3-0 and both have a lower ERA than Rodon (2.40). It’s going to be really scary for the opposition once Los gets locked in. It wouldn’t be hard to imagine a 27-inning, all-weekend shutout when Boston College or another team of its ilk comes to the Doak.

Eric Peterson and John Olczak closed out the Sunday shutout, with Peterson fanning a pair in a pair of innings and Olczak fanning two in the ninth. They’ve both pitched in on three combined shutouts this year, and Olczak has yet to allow a run in seven innings. Peterson has a 12-to-1 strikeout-to-walk ratio and an 0.84 ERA in 10.2 innings.

Jake Armstrong struck the big blow offensively, getting the Pack’s first hit with two out in the bottom of the third. Thanks to some walk and error implosion, two runs were in before Armstrong laced his single to left field to make it 4-0 and effectively crush the spirit of the Irish (5-9, 0-3). Armstrong finished 2-for-4 and is up to 11 RBI, one off the team lead. Brett Austin was the only other Pack player to record more than one hit (2-for-3), and he also walked and scored twice. Trea Turner was 1-for-3 with two walks and two runs scored.

Rodon had a pinch-hit RBI single and is now batting .500 on the year (in four at bats).

After a midweek roadie at Stetson, the schedule gets really real for the Pack in the 21 games that follow, including 12 out of their next 15 ACC games away from the friendly confines of the Doak. In all, just five of the next 22 games are at home. Check it: 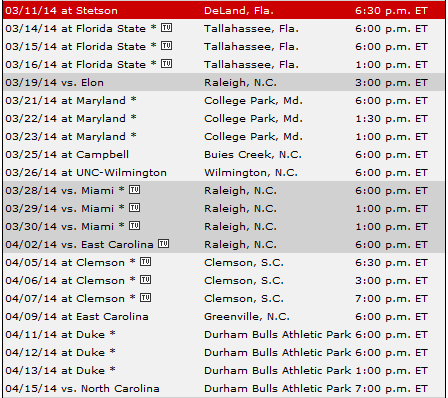 The N.C. State softball team won its 12th straight and moved to 6-0 in conference play with a 5-1 win over Pittsburgh, sweeping the Panthers in their inaugural ACC series. Four players had two or more hits and Emily Weiman went the distance without allowing an earned run.

Renada Davis led the way at the plate, going 3-for-4 with a run scored. Lana Van Dyken was 2-for-4 and also scored a run. Nadia Kemp was 2-for-2 with a run scored and Leah Jones drove in a run in her 2-for-3 day. Hanna Sommer had just one hit but drove in three.

The Pack (13-6, 6-0) got the leadoff woman on in every inning but left nine ladies on base, allowing Pitt (8-11, 0-3) to stay in the game despite getting dominated. The Panthers were outhit 10-3 and Weiman fanned 11. Weiman has personally won 10 in a row during the Pack’s streak, and she saved the other two wins. She hasn’t allowed more than two earned runs in a start since February 21st against Lehigh and owns a 2.33 ERA on the season.

Like the men, State heads south to the FLA to take on Florida State in a pivotal three-game series next weekend. The Seminoles are off to a 20-3 start and entered the week ranked in the top 10 but inexplicably dropped a game to 3-16 Virginia over the weekend. Notre Dame (#22), which like Florida State is off to a 2-1 start in league play, is the only other ranked team in the ACC. The Pack are the only undefeated team in league play.