'This Is Our State' replaced by #Statement campaign

Share All sharing options for: 'This Is Our State' replaced by #Statement campaign

A couple of months after we learned that "This Is Our State" had seen its last billboard, NC State revealed it's latest campaign: #Statement. The above introductory video is well done and even has a variation of a song by The National serving as the soundtrack. Look at you, athletics department, getting all mildly hip.

Unfortunately, as I started watching the video, this happened: 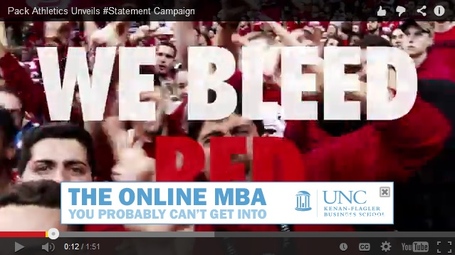 Anyway, whatever you might think about the new marketing campaign, the athletics department did a nice job today integrating some of State's more visible alums and Twitter to spread the word.

It was definitely a pass! #STATEment pic.twitter.com/EMQfJLw1ct

Overcame serious odds with the love and support of my PACK...survival was my #STATEment pic.twitter.com/xFHGTbCUwG

Always proud to be a part of the Pack and the impact it had on my life #Statement' pic.twitter.com/6d1zCU3KDN