Because I’m a nerd and you guys are nerds, let’s do some nerd stuff! The excellent and always entertaining POAPS series had me thinking about how do you identify a coach who is doing great things? The easy way to do it is just pick a guy that’s always winning national championships and going to final fours, but that probably doesn’t help us in our search for a new coach does it? We need to identify guys who are doing great things but at places that, probably, aren’t competing for a final four (I’m still keeping my fingers crossed for Gregg Marshall though).

A piece of the puzzle that is difficult to assess is a coach in a lower tier conference (like Levelle Moten in the MEAC). NCCU’s KenPom ranking is 138, so BFD right? That’s a lower ranking than our Wolfpack and we are firing our coach! This is why context is important, NCCU isn’t really on the same playing field as NC State and shouldn’t be directly judged by the raw KenPom number. 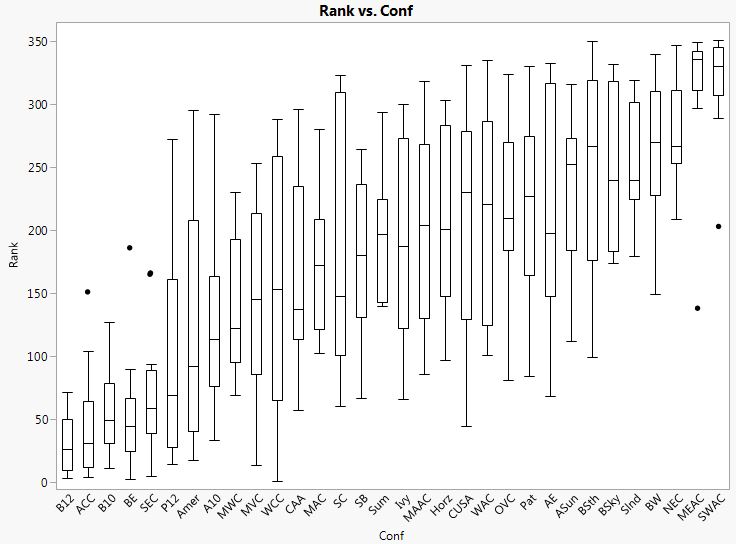 For context, above is how the conferences stack up based on KenPom’s rankings. I’ve ordered them based on the mean value. What you are looking at here is a box plot that represents that average and range of rankings for each conference with outliers noted as points. It’s also apparent why the Power 5 conferences and the Big East are considered the high major conferences (although the Pac-12 is not up to the same standard as the others). The take home point here is that, in my opinion, you have to consider how a potential coaching candidate’s team is faring versus its conference as a whole. 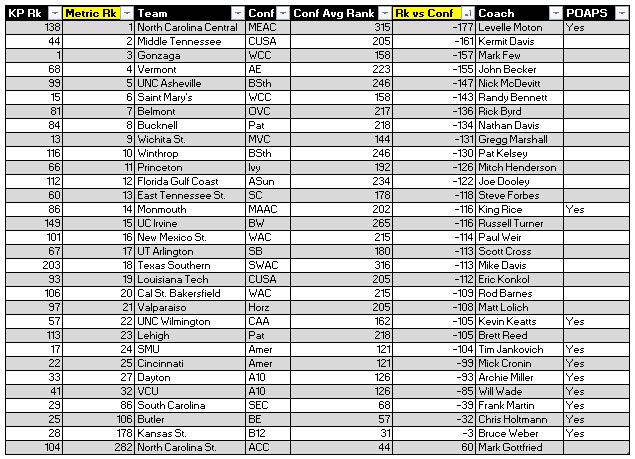 Here’s a table of the top 25 teams based on the above metric as well as any teams/coaches that there has been a POAPS segment on and, of course, NC State for reference. Well lookie here! Levelle Moton is killing it based on this metric, also Steve Forbes (or is it Teve Torbes?) is coaching East Tennessee St? Strange move for a billionaire. My initial reaction to this list was that a lot of the guys listed as up and comers perform well here and keeping company with Mark Few and Gregg Marshall is not a bad sign. The cool thing is that a lot of these coaches weren’t even on my radar, and, hey Mike Davis! Bruce Weber, so surprisingly, doesn’t perform well here (reminder, positive numbers are bad mmkay?) sorry Steven. is perfectly average here! I also realized that this metric eliminates any Power 6 candidates due to the fact that the conference averages for the Power 6 are so low. So, I decided to try something different. 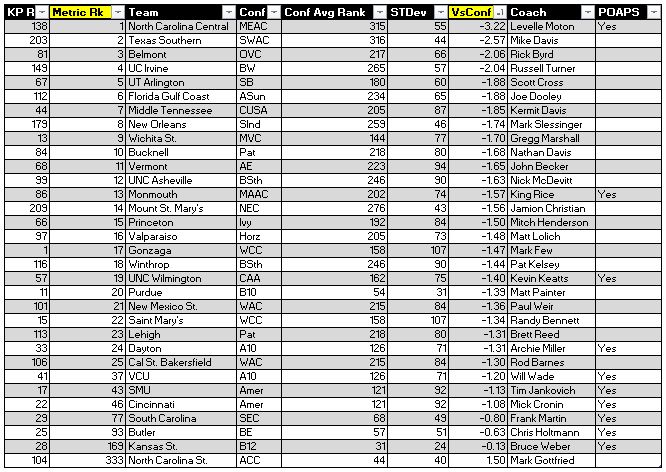 Following a similar concept, I decided to take a look at how teams performed based on standard deviations from the mean (above). Using each individual conference’s mean ranking and standard deviation, you can determine how many standard deviations from the mean a team performed (again negative is better here). Once again, Levelle Moton is the champ! That 138 kenpom ranking is redonkaballs for a MEAC team. This metric includes some Power 6 coaches (okay one) and also gives Archie Miller (and Alvin Gentry! Mark Slessinger!) a boost into the top 25.

This is still skewed to the benefit of an overachiever in a poor conference, but I do think it is a good way to identify up and comers and guys that are performing out of whack with expectations of their conference and look at all the POAPS that need to be completed, get on it jerks!

*Tables have been updated to show ranking by each metric and to fix boneheaded errors (denoted by strikethroughs) that were pointed out in the comments by my jerk brother. I appreciate PackHooligan for finding the error in naming the New Orleans coach because the first picture that shows up for Mark Slessinger is awesome.