The opportunity is right there, just grab it. Please.

Share All sharing options for: Dave Doeren looks to improve his record against ranked teams vs Clemson

This kind of piggybacks on Alec’s post about how big of an opportunity this Clemson game is. It also is pretty much the biggest wet blanket post, and may diminish hype/June levels, but I attempt to swing it back at the end. After I made the below table I considered just scrapping the whole thing in a bout of depression but then I was like, you can’t let a good spreadsheet go to waste. Let the depressing statistics commence:

In four of the five matchups Dave Doeren’s Wolfpack teams have had with Clemson, the Tigers have been ranked no lower than 4th. The other time, 2014, State lost 41-0. I wonder if Clemson fans get mad at always being ranked 3 or 4 but not 1... #firstworldproblems.

In 14 attempts in five previous seasons, Doeren has but two wins against ranked opponents. Those two wins were both last year against FSU and Louisville. Their seasons did not end so well. 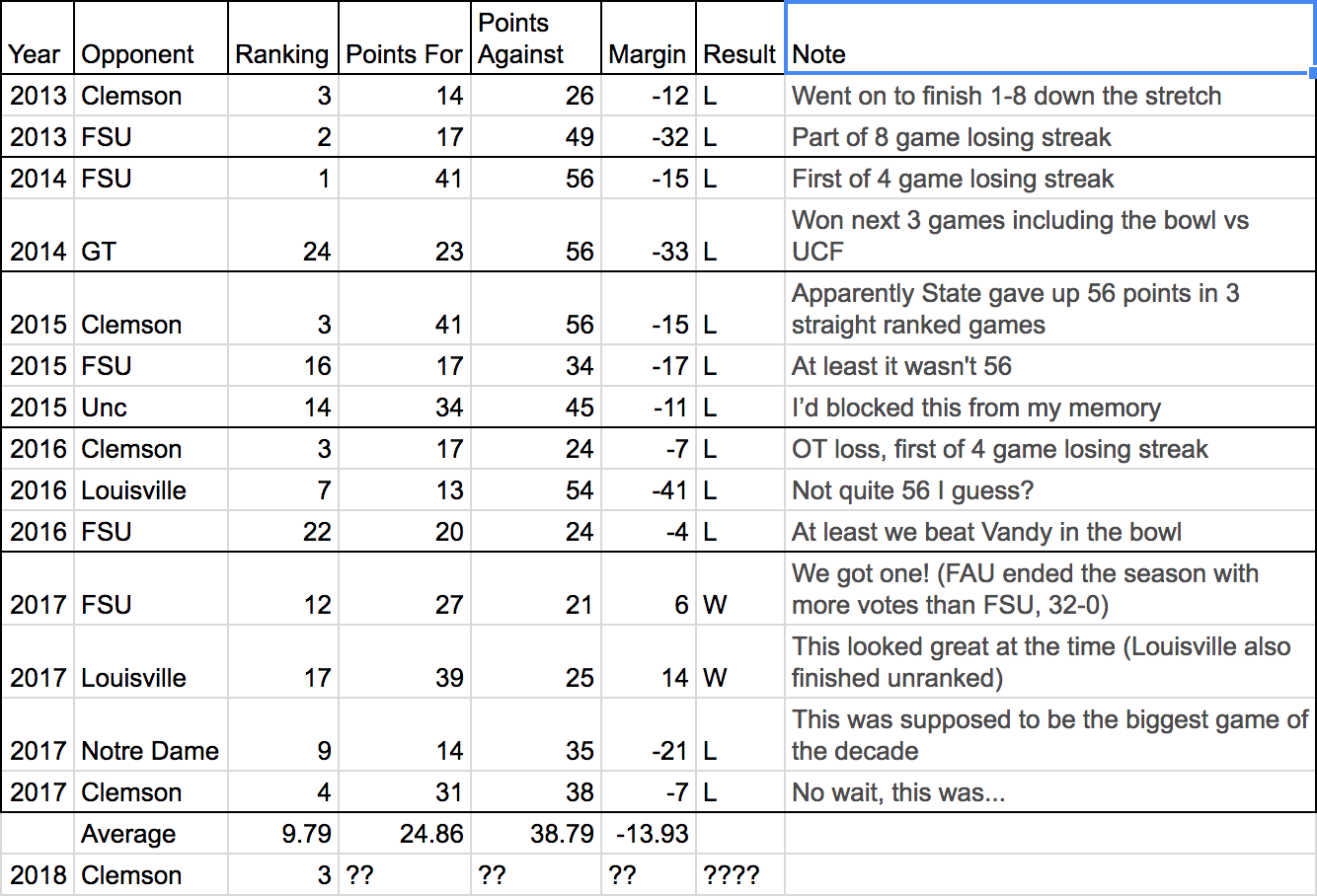 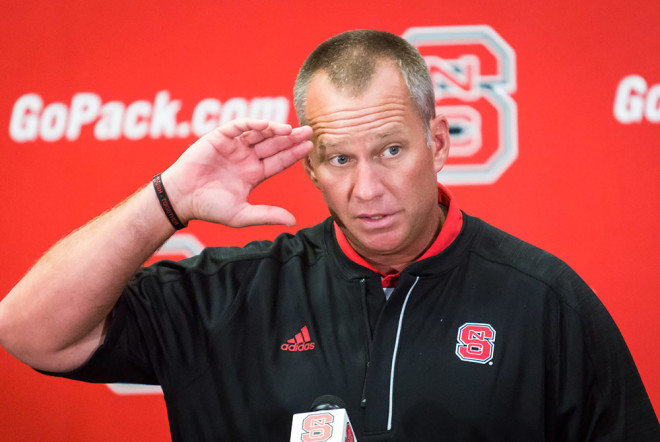 This slider was the only way to get this table in here.

This shows how much of an opportunity this week’s game vs Clemson is. Without the WVU game on the schedule, this will be the Pack’s lone chance to play a ranked regular season opponent this season (thanks for the hit on SoS, Atlantic). If your program is truly meant to make a leap, to take that next step, then you have to not only play but beat highly ranked opponents. This is the standard Clemson and other top ranked teams have set for themselves. If NC State ever hopes to grow into that caliber of program, you have to take advantage of the chances when the present themselves. Every year it’s the same conversation, whether it’s the CFP or the NCAA basketball tournament, “who’d ya beat?”

Is this the biggest game in over a decade? Well, no. Those two chances came and went last season. I wrote last year that the USC game was one of the biggest non-conference games of Doeren’s tenure. That one didn’t go as expected, but was another missed opportunity. These chances need to be maximized.

Does that make this week a “must win”? No, not at all. State has a chance at 10 or even 11 regular season wins, which would be historic. Raleigh literally threw a parade for NC State winning the Gator Bowl, and this season could end even better. This would likely lead to another great June full of red light recruiting updates. But eventually, eventually, the Wolfpack want to get that national respect that comes from being expected to win. That expectation has been earned by other programs, and it wasn’t from moral victories.

I really didn’t start this intending for it to sound depressing or like I’m dumping on the team. I love the progress the coach and staff have made incrementally, brick by brickyard. I’ve been counting the days to Saturday to the point I’ve basically told my family don’t talk to me for 4 hours that afternoon, and I might not want to look at anyone all night if it doesn’t go well.

I have faith Doeren can make the leap, I just feel like if it’s going to happen, it should happen now. Ryan Finley (not Lindsey) may well be the best NC State QB since you-know-who. He and a whole suite of players may not be on the team next year either through graduation or testing the draft. The recruiting reloads look good (if not great), but the talent on the team right now is STRONG, and you can not discount experience. This is the most complete team Doeren has assembled. We said that last year and this team’s returning players are a year older and a year better, and setting the mold for the young’ns behind them. This squad is the most capable of (finally) beating those damn Tigers. Let’s get this thing done.

Coach Henry, take us out, then show us that brick wall.