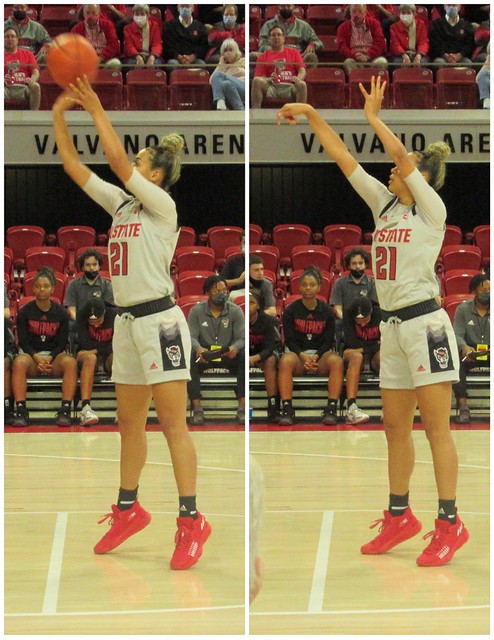 Madison Hayes. Photo Sbas. I know. I used this photo of Madison for the St. Mary's pregame write-up; however, Madison had one of her best shooting games against St. Mary's hitting all three of her shots; two from the three point line. So! Repeat!

State plays Georgia Thursday, December 16th at 6 p.m. in Reynolds Coliseum. Georgia is currently ranked 17th by both the Associated Press Poll and the USA Today/WBCA Coaches Poll. State of course is ranked 2nd by both polls.

Instead of using Georgia's starting lineup in their last game, a 66-56 win over Texas Tech in Lubbock, Texas, I thought I might take a look at Georgia's game against Georgia Tech, a home loss of 55-54, because Georgia Tech will be a player this season in the ACC.

Georgia is 8-1 overall, has played no conference games, has a Live RPI of 28, has a Net of 13, has an ELO of 14 and has a SOS of 54. Georgia's quad one record is 1-1. Georgia's best win was that at home against number 21 ranked Notre Dame. Can't really dislike a team which beats Notre Dame can we?

From Her Hoop Stats Lobo's Look: