After losing to Duke in game four of the weekend series, State fell to 7th in the ACC standings and will face UNC on Wednesday, May 12th at 3:30: 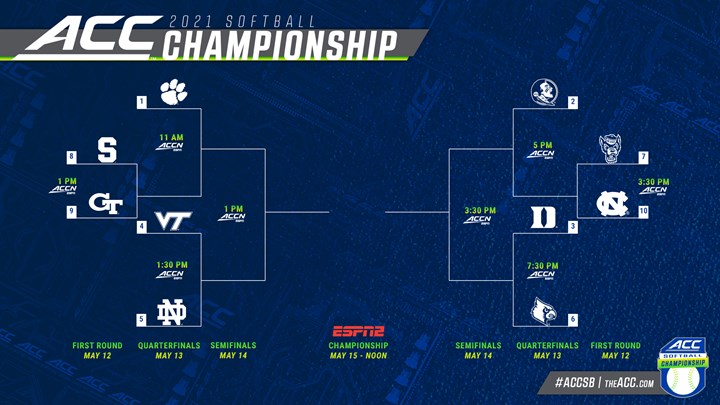 State was edged out by Louisville for 6th place when Louisville beat UNC in the 2nd game of double header 7-3. State finished the regular season 25-24; 15-22 in conference. It might be a blessing for State if they get by UNC in that State managed to win one game against FSU. UNC finished 10th in the conference with a 14-25 overall record; 10-19 in conference. State did not face UNC this year.

Maybe State would have won two or tree games if Abby Trahan had pitched in the series with Duke or Logan Morris, Angie Rizzi and Tatyana Forbes had played in games one to three; however, one has to support Coach's decision to sit these players out for disciplinary reasons. State's offense showed up in game four of the series with Duke as Angie, Randi Farricka and Logan hit home runs. State lead after 5 innings 7-6 although the 7th run scored by Sam Russ should have been recorded as an out as replays showed she was tagged out at the plate. Errors and poor pitching allowed Duke to pile on 4 runs in the 6th inning and 2 in the 7th for the final 12-7 score.

State ended up losing 11 of their last 12 games winning only the 3rd game at FSU. We do note that Duke, FSU and Clemson, who won the regular season championship in their first true season in the conference, were all ranked teams. Coach from what I learned was not happy that State was picked to finish 8th in the conference by the entity which makes such preseason decisions. Well, State finished 7th. Yahoo! I will show myself out.